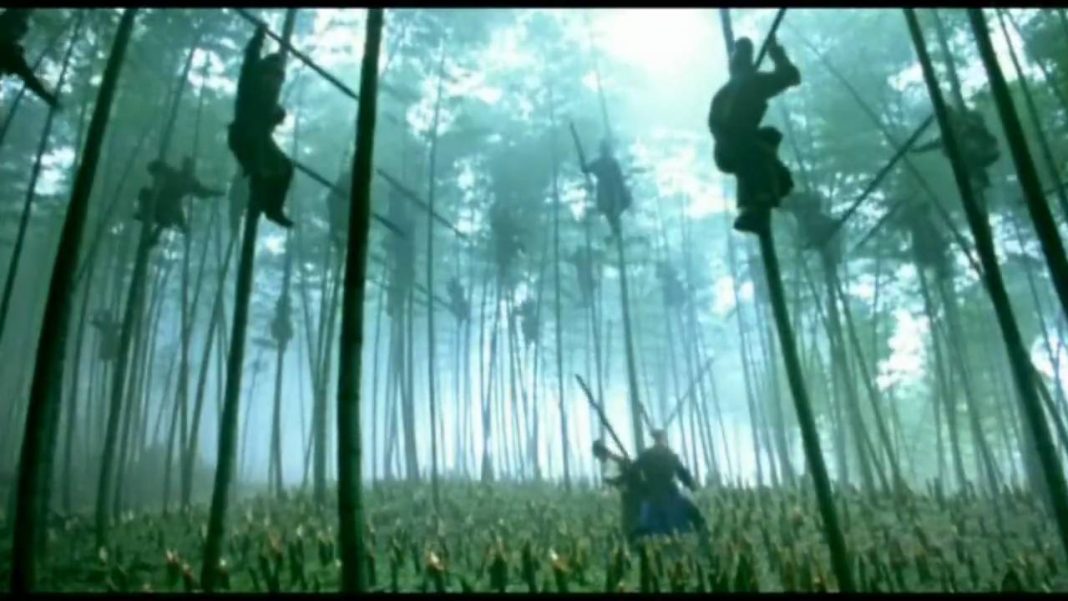 The wuxia film House of Flying Daggers (2004) is more a love story than martial arts film. It is directed by Yimou Zhang and stars Andy Lau, Ziyi Zhang and Takeshi Kaneshiro.

House of Flying Daggers (2004) was chosen as China’s entry for the Academy Award for Best Foreign Language Film in 2004, but was not nominated in that category. It did receive a nomination for Best Cinematography in the 2004’s Academy Award.

House of Flying Daggers (2004) was set in the year is 859 AD, as China’s once flourishing Tang Dynasty is in decline and unrest rages throughout the land. Rebel armies form in protest and battle the the corrupt government. The largest of these rebel groups is the House of Flying Daggers, which has become even more powerful under a mysterious new leader. Two local captains, Leo and Jin are ordered to capture the new leader and they design an elaborate plan to do so. Captain Jin will pretend to be a lone warrior called Wind and rescue the beautiful, blind revolutionary Mei from prison, earning her trust so he can  escort her to the secret headquarters of the House of Flying Daggers. Their plan works, but Jin and Mei fall deeply in love on their long journey to the House.  Danger lurks in the forest they must travel through and the wind is completely still, as though it senses their tension. If what has grown between the two is really love, how do they deal with the plots in their heads, and the secrets in their hearts?

China entered House of Flying Daggers (2004) for the Academy Award for Best Foreign Language Film, but it was not nominated in that category. It did receive a nomination for Best Achievement in Cinematography in the 2004’s Academy Awards. It was nominated for Best Foreign Film at the 2005 Golden Globes, USA and was nominated in numerous categories at the 2005 BAFTA Awards and the same happened at the 2005 Academy of Science Fiction, Fantasy & Horror Films, USA as well as at numerous other awards shows.

On December 3, 2004 House of Flying Daggers (2004) opened in limited release in New York City and Los Angeles and opened on additional screens throughout the United States on January 1, 2005.