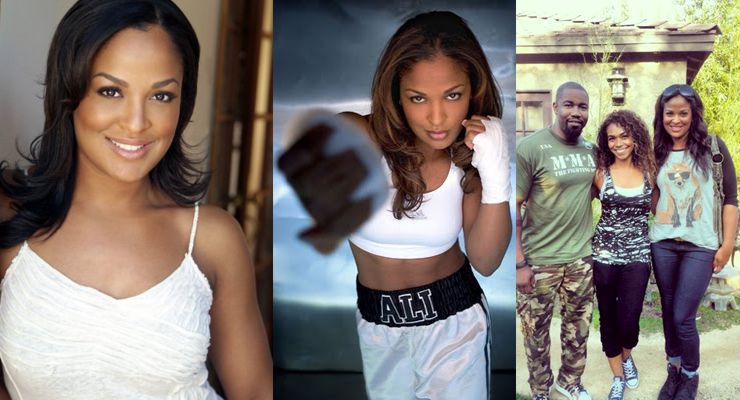 Laila Ali was born to on December 30, 1977 in Miami Beach, Florida to heavyweight boxing legend Muhammad Ali and his third wife, Veronica Porsche Ali. Laila is the eighth of her father’s nine children and his youngest daughter.

Laila Ali began boxing when she was 18 years old after watching a Christy Martin fight on television. It was during a Good Morning America interview with Diane Sawyer that she first announced her decision to become a professional boxer. When Laila told her father, Muhammad Ali, that she was planning to box professionally, he was against her entering the ring, but Laila assured him she would be fighting women, and not men, and she had his genetics, and no doubt, talent.

Laila Ali has established herself as a multimedia personality. In 2002 she published her motivational memoir Reach: Finding Strength, Spirit, and Personal Power. In 2007 she released a series of workout videos with boxing great Sugar Ray Leonard. The Early Show on CBS had Laila Ali appearing as a health and fitness correspondent. During the 2007 season, Laila Ali appeared on Dancing with the Stars on ABC. In 2008 she and wrestler Hulk Hogan co-hosted NBC’s American Gladiators. She competed in Stars Earn Stripes on NBC (2012), and she currently co-hosts the program Everyday Health on ABC. She also serves as president of the Women’s Sports Foundation.

Laila Ali stars with Neal McDonough, and Michael Jai White in Falcon Rising, the story of an ex-marine whose guilt allows him to be used as a weapon by the US Government.

On October 8, 1999, a 21-year-old Laila Ali, at 5’10” and 166 lbs, fought her first match against a woman WomenBoxing.com called an “out-of-shape novice” boxer, April Fowler, of Michigan City, Indiana. They fought at the Turning Stone Resort & Casino on the Oneida Indian Nation in Verona, New York. This was Laila Ali’s first match, but many journalists and fans attended because she was Muhammad Ali’s daughter. Ali’s ring debut occurred on the evening of what was supposed to be the first male-female professional bout ever to be sanctioned by a US state boxing commission and even though the bout was later ruled an exhibition, it drew even more attention to women’s boxing and to Laila Ali. As WomenBoxing.com explains: “The near-alignment of the two events focused more attention on female professional boxing than there had been since Christy Martin’s 1996 pay-per-view fight with Deirdre Gogarty.”

Laila Ali also won her second match by a TKO with only 3 seconds left on the clock. In that match her opponent was 5’4″ Shadina Pennybaker, from Pittsburgh, who was making a pro debut after earning a 2-1 record as an amateur. They fought at the Mountaineer Casino, Racetrack and Resort in Chester, West Virginia.

Laila Ali captured eight wins in a row and many boxing fans expressed a desire to see her square off in a boxing ring with George Foreman’s daughter, Freeda Foreman or Joe Frazier’s daughter, Jackie Frazier-Lyde. On the evening of June 8, 2001, Ali and Frazier finally met. The fight was nicknamed Ali/Frazier IV in allusion to their fathers’ famous fight trilogy. Ali won by a majority judges’ decision in eight rounds. This match by Ali and Frazier was the first pay-per-view match between two black women.

On June 7, 2002, after a year’s hiatus, Laila Ali beat Shirvelle Williams in a six-round decision.

On August 17, 2002 in Las Vegas, Laila Ali won the IBA title with a second-round knockout of Suzette Taylor.

On November 8, 2002 she retained that title and unified the crown by adding the WIBA and IWBF belts with an eight-round TKO win over her division’s other world champion, Valerie Mahfood, in Las Vegas. Laila Ali stopped a bloodied Mahfood in eight rounds.

On June 21, 2003, Mahfood and Laila Ali fought a rematch, this time in Los Angeles. Once again bloodied by Ali, Mahfood lost by TKO in six rounds while trying to recover her world title. Nevertheless, for the first time in Ali’s boxing career, she suffered a bad cut on her right eyelid and a bloodied nose, inflicted by Mahfood, something no other female boxer has done to Ali to this day.

On July 30, 2004, she stopped Monica Nunez in nine rounds, in her father’s native city of Louisville, Kentucky. This fight was part of the undercard for the fight in which Mike Tyson was surprisingly knocked out by fringe contender Danny Williams.

On September 24, 2004, Ali added the IWBF Light Heavyweight title to her resume by beating Gwendolyn O’Neil (whom she had earlier canceled a fight against) by a knockout in three rounds, at Atlanta, Georgia.

On February 1, 2005 in Atlanta, Ali scored a commanding and decisive eighth-round technical knockout over Cassandra Geigger in a ten-round fight.

On June 11, 2005, on the undercard to the Tyson-Kevin McBride fight, Ali defeated Erin Toughill in round three to remain undefeated and won the World Boxing Council title in addition to defending her WIBA crown.[16] (The Ali-Toughill bout is considered one of the most violent female to female fights in history.) She was the second woman to win a WBC title (Jackie Nava was the first). Toughill and Ali disliked each other, and prior to the fight Toughill joked about Ali. Ali promised she would punish Toughill, much like her father did with Ernie Terrell back in 1967.

On December 17, 2005, in Berlin, Laila Ali fought and defeated Åsa Sandell by TKO in the fifth round. The decision was heavily disputed and the audience booed Ali during her post-fight interview.

Laila Ali was a guest on Quite Frankly with Stephen A. Smith on June 7, 2006, where she announced that she would be making a world tour, and she said that she was looking forward to fighting Ann Wolfe in October of 2006. This fight with Wolfe never took place, and instead, on November 11, 2006, Laila Ali fought and defeated Shelley Burton by TKO in the fourth round. Ali was rescheduled to fight Gwendolyn O’Neil in Cape Town, on August 5, 2006, but Ali pulled out amid allegations of fraud. The match eventually took place in South Africa on February 2, 2007. Ali defeated O’Neil in the first-round by technical knockout. This was Laila Ali’s last professional fight.