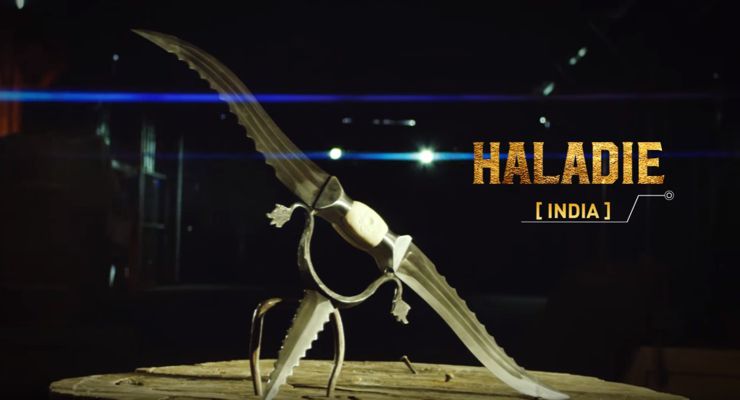 Fellas, sometimes the right man for the job might be a woman . . . says Danny Trejo on the second episode of Man at Arms: Art of War, “Weapons of the Gods” referring to Crystal Santos’ use of a Haladie, a triple bladed daggar. The Haladie is an ancient weapon from India used in the 18th to 19th century by the Rajput warriors, a class of honorable warriors much like the Samurai of Japan. During this time, India was not just one country, but many kingdoms who were in constant war with one another. Those with the Haladie weapons usually won. The possible origin of the Haladie daggars may have been the hard and sharp antelope horns that were used as weapons.

In this episode, martial artist and blacksmith Illya Alekseyev begins the job of creating the Haladie and then brings in Ellen Durkan to help work on the knuckle guard and the blade of the Haladie Knife. Ellen Durkan is a classically trained blacksmith known for her metal corsetry called Forged Fashions. Master Blacksmith Kerry Stagmer credits Ellen for her great eye and her skilled ability to create works of art. Much like Crystal Santos who works in the action acting and stunt industry, Ellen is a Blacksmith who has the ability to hold her own against the big guys with beards who push each other around in the blacksmith industry.  Both women are respected for their abilities and they don’t take “crap” from anybody.

Next Kerry Stagmer and Ellen Durkan work with Illya Alekseyev and others on the Urumi, a very long flexible sword that is used in mass battles with numerous opponents. The Urumi will terrify any warrior who comes against it in action. It takes years of training to use the Urumi, the use of which is based on a Yoga system. Many of the stances, the dancing movements, and the poses used when fighting with the Urumi are performed to confuse the opponent. In her jewelry shop, Ellen creates the bottom of the Urumi pommel, which takes a lot of patience and a steady hand and is truly a work of art.

Once the weapons are ready to test, Danny Trejo makes it clear that you do not want to mistake Haladie with pilates. The Haladie daggar requires the skill of fluid motion. While testing the Haladie, Crystal Santos puts the blade into the fruit and then right through the table, proving that the right “man” for the job was a woman. Next up, D’amon Stith, exotic weapons expert, the founder of the Guild of the Silent Sword and a martial artist with three decades of training shows how to use the Haladie daggar as a multi purpose knife to wage war against sandbags and watching him move is awesome, frightening and deadly.

Next up they finish creating the Urumi, the deadly Indian whip sword and it is fascinating to watch these talented blacksmiths, metalsmiths and swordsmiths work. When the final touches are finished including gold and gem stones, the sword is beautiful, lethal, and ready to test. Since Crystal Santos has never used this weapon before, she brings in a friend, Kamalit Singh, who is a Sikh Weapons Master, an expert with the Urumi. He has been practicing since he was eleven years old. Kamalit and Crystal have a Whip Off, Crystal with a leather whip and Kamalit with the Urumi. Just like Crystal’s whip, the Urumi is truly a tool of intimidation against multiple opponents and Kamalit’s movements  are beautiful and deadly at the same time. “Just like a whip, the speed of the Urumi blade increases exponentially out of the hilt. The tip reaches a peak velocity of nearly 100 hundred miles per hour, about twice the speed of a fast katana slice.”