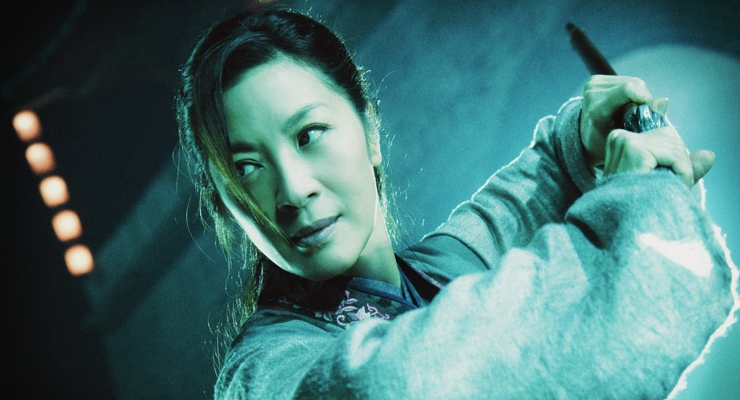 The 48-year-old former Bond girl plays a retired assassin haunted by her past life in the kung fu thriller Reign of Assassins, which opens in Asia on Thursday. Producer John Woo crafted the role in the $14 million picture for his longtime friend when both Hong Kong transplants were developing their Hollywood careers in Los Angeles.

Yeoh has focused on her career in the West since the global success of “Crouching Tiger,” appearing in a range of works including Memoirs of a Geisha, the third installment of “The Mummy” franchise and Oscar winner Danny Boyle’s sci-fi thriller “Sunshine.” Many of these parts were dramatic roles.

The extended absence might have some fans wondering if the ballerina-turned-action star has lost her touch for the more physical screen performances she is known for in Asia.

A former Miss Malaysia, Michelle Yeoh parlayed her beauty pageant credentials into a full-fledged acting career in Hong Kong in the 1980s and 1990s, where she earned a reputation as a gritty daredevil who could hold her own against — and even outshine — the likes of Jackie Chan and Jet Li in complicated kung fu and stunt sequences. Hollywood came beckoning in 1997 with a costarring role alongside Pierce Brosnan in the James Bond film Tomorrow Never Dies.

Yeoh told a news conference in Hong Kong recently that she, too, had initial doubts about the role, noting it required challenging swordplay that drew her close to her fellow actors.

“I was a little worried initially. I had not shot a kung fu movie since ‘Crouching Tiger, Hidden Dragon.’ I put that skill set aside for a long time,” she said.

But her years of experience in action film quickly showed, especially when it came to fight sequences where the actors were suspended by wires.

“Your timing has to be very accurate. I’ve done a lot of wire work before. I can see that experience makes a big difference,” Michelle Yeoh said.

Woo, whose Lion Rock Productions made Reign of Assassins, said Yeoh’s action prowess has not waned. The veteran actress performed 90% of her own moves and stunts, he said.

“Her kung fu moves are still so clean, so powerful. She still has great rhythm. She still looks great,” Woo said. “Michelle Yeoh is the same.”

Director Su Chao-pin said he was impressed by Yeoh’s routine of waking up three hours before 7 a.m. shoots for stretching and running.

“Her level of fitness is the product of tremendous self-discipline,” Su said.

Woo said he was also struck by Yeoh’s ability to tackle the emotional journey of her character, who’s determined to forge a new life as an unknown fabric seller with her new husband (South Korea’s Jung Woo-sung), only to be tracked down by accomplices from her past. Her husband, a courier, also harbors a secret identity.

“It’s completely different from her previous characters where she is an action star or plays someone who is a strong fighter. In this movie, not only does she fight well, she acts well too. She shows her real emotion,” the “Mission: Impossible II” director said.

Perhaps due to Yeoh’s growing international profile, Woo said Reign of Assassins has drawn more interest from distributors in Europe and North America than “Red Cliff,” his recent historical epic that marked his return to Chinese film.

“To be honest, I’m a little jealous,” Woo joked.