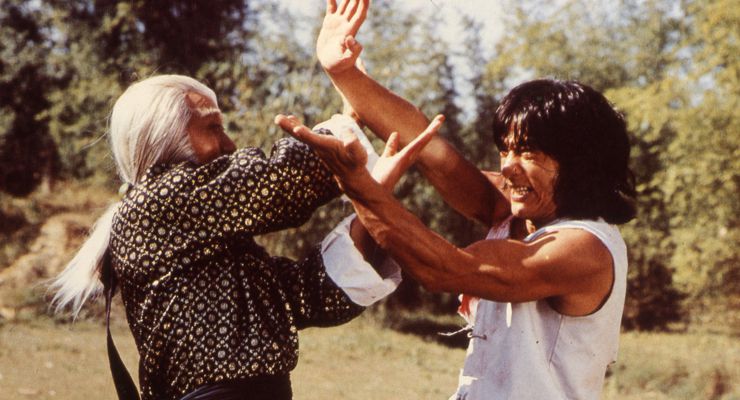 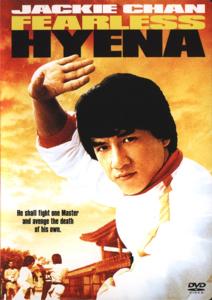 In The Fearless Hyena (1979), General Yen Ting Hua (Yen Shi Kuan), is killing all members of the rebellious Hsin Yi clan. “Unicorn” (Li Kuan) was able to barely survive and escape Yen and his evil men, seeks Master Chen Pang Fe, the last surviving member of the clan to wan him. Meanwhile, Lung (Jackie Chan) is constantly getting in trouble using his martial arts while his Grandfather (James Tien) constantly warns him to not use his art in public. No matter how harshly his Grandfather punishes him, Lung still manages to get in trouble. While trying to get a job, Lung gets a lucrative offer at a bogus martial arts school to fight all challengers with the winner taking all the losing fighter’s students and their tuition. While fighting under different disguises as cross-eyed janitor and a woman (yes, Jackie dresses in drag here) and is discovered by the General which gets his Grandfather killed. Unicorn then trains Lung in ?Emotional? kung fu in order to defeat Yen and his men.

This was before he moved onto Golden Harvest Films where his first name was changed to Jackie from Jacky, which you will notice on the credits. Before this film was made (in early 1979), Director Lo Wei, who was desperately trying to mold Jackie Chan into the “next Bruce Lee,” loaned him out to Seasonal Films knowing that his previous film efforts were not well received and considered him “box office poison.” But the film gods were smiling upon Jackie when he collaborated with Yuen Woo Ping on his first directorial effort, SNAKE IN THE EAGLE?S SHADOW. SNAKE broke all the Asian box office records previously held by Bruce Lee. Needless to say, Woo-Ping and Jackie quickly followed it up with DRUNKEN MASTER, which was even more successful.

After having finally tasted success at Seasonal Films, Jackie, unfortunately, had to go back and fulfill his contract with Lo Wei. But this time, Lo Wei let Jackie direct his next film FEARLESS HYENA, the first film where he was able to call the shots. HYENA was shot on a lower budget than what Jackie got at Seasonal. However, Jackie made a really good film for practically nothing, and for a while this film made more money in the box office than Drunken Master.

The story structure is very similar to SNAKE and DRUNKEN MASTER, where Jackie plays the innocent yet mischievous underdog who constantly gets into trouble. This gives Jackie plenty of excuses to show some well-choreographed training and fight sequences. The comedy in this film is pretty simple and broad with cartoon sound effects to make it appear even sillier, but it has a certain innocence that makes this so film special. James Tien turns in a really good performance (probably his best) as Lung?s Grandfather.

The film is a good precursor of what to expect from an emerging world class filmmaker in the rough. Yeah, sure the lighting is minimal and the story is pretty simple, but it’s the pure martial arts skills displayed here without wires and special effects that make this film an old school must see classic.

THE ACTION
The action is simple yet extremely well done, which represents how a lot of films were shot at the time. There are some similar rehashes in the fights from Jackie’s previous films, but he is able to highlight them here more by fine tuning the techniques, timing, and tempo. The film gets brutal with some blood and a gruesome act of non-humorous violence (in comparison to his later films) at the very climax of the film where Jackie gets revenge on the General. The cinematography is simple with not many cuts in the action, but still very effective because the viewer can clearly see all the action. There are no real wire gags, special effects, or trick photography here. You have to admire the sheer physical ability of the actors involved.

What we get to see here maybe for the last time in his films is Jackie performing a form (a set of pre-arranged moves usually performed alone aka kata, kuen, or palgue ). Just like in SNAKE and DRUNKEN MASTER, Chan performs katas that show off his emotional understanding of the techniques accompanied with the utmost power, speed, grace, skill, balance, and timing. I feel Jackie is one of a handful of martial arts actors that have a strong presence while doing a form on film.

HYENA is loaded with a lot of traditional fights and training sequences that will keep an action junkie satisfied. One of the moments that shows his sheer physical strength and agility is when Jackie is hanging upside-down from a tree and is doing push-ups/sit ups against a wood plank. This scene must be seen to believe.

THE PRESENTATION
The Columbia version is a welcome relief compared to the Simitar and Ocean Shores DVDs which were cropped off at the sides (pan and scan) with the subtitles flowing off the screen. However there are still minor scratches and specks throughout the film. The colors are not sharp which probably has to do with the actual transfer of the film they used for the DVD. The re-mastered subtitles are a direct translation off the English dub (on the DVD) and not a true translation from the Cantonese language version.