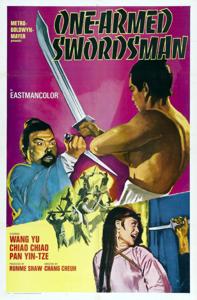 In The One-Armed Swordsman (1967) an evil gang attacks the Chi school of Golden Sword Kung Fu. A student, Fang Cheng sacrifices his life to save the teacher, Qi Rufeng, and his school. Cheng’s dying wish is that his son be taken in as a student. Young Fang Kang grows up in the school and treasures his father’s broken sword and the memory of his father’s sacrifice. The other students, including the teacher’s daughter, Pei-er, resent him and attempt to drive him from the school. The teacher’s daughter challenges him to a fight and when he refuses she becomes enraged and recklessly chops off his arm.

Fang Kang retreats, broken and bloody, and falls from a bridge into the passing boat of a peasant girl Xiaoman, a young poor girl living alone, and she nurses him back to health, and the two fall in love. Fang Kang eventually recovers with the girl’s help but must now face a life with only one arm. Xiaoman gives him a half burnt kung fu book which she inherited from her now dead parents. The instructions i the book allow Fang Gang to master a one-armed style of sword fighting and he becomes even stronger than before.

As Master Qi Rufeng prepares to celebrate his 55 birthday and his retirement from martial arts, a celebration is set where he will select his successor. Meanwhile, the evil gang who originally attacked the Golden Sword school, Long-armed Devil, have develop a weapon that renders the Golden Sword useless and begins killing the schools students on their way to the celebration.

Fang Gang hears of the plot and against Xiaoman’s wishes, he goes to the aid of the wounded Qi Rufeng and the students, most of whom have already died. He fights a brutal battle and kills the Long-armed Devil, but he does not take over the school. Fang Gang returns to Xiaoman and begins a life as a farmer.