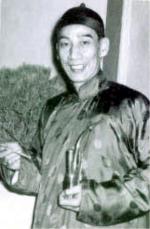 One could say that the “kung-fu movie” (term coined in the the early seventies) started with The True Story of Wong Fei Hung: Whiplash Snuffs the Candle Flame. True Story was the very first martial-arts movie that aimed for a realistic display of authentic martial arts in a realistic setting. This was the first film about Wong Fei-hung, famed chinese folk hero. Plot: The film opens with scenes establishing Wong Fei-hung’s credentials as a martial-artist (he performs a lengthy lion dance) and an eminent “sifu” (master/teacher) of the “Authentic Shaolin Boxing School” as he inducts a new student Leung Foon (Cho Tat-wah). He is then called to rescue a young woman held against her will by a crafty rascal. Wounded in the attempt, he is saved by a foxy courtesan who falls for him, much to the master’s embarrassment. Once that affair is settled, Master Wong has to deal with the undisciplined behaviour of his new student Foon and he also runs afoul of a loutish sifu rival. This leads eventually to a confrontation where Master Wong armed with a set of steel whips snuffs out the flames of a pair of candles in an impromptu display.