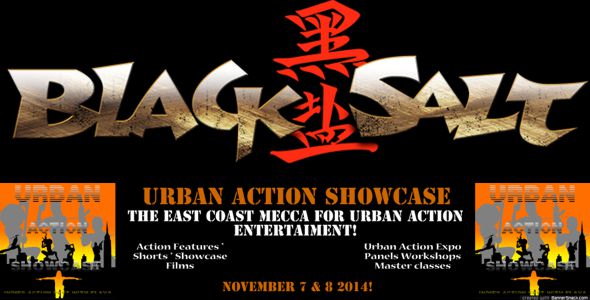 In an age where action movies have become highly popular, at least one major issue continues to pop up, often regarding the lack of minority leading roles in such films. Demetrius Angelo the creator of the Urban Action Showcase and Owen Ratliff creator of the Black Salt feature film franchise has teamed up to help solve this problem.

The Urban Action Showcase is a multi-day Independent Action Showcase, Expo and Film Festival that Recognize, Promote, Facilitate, and Encourage the participation of ethnic minority filmmakers in the Action Film Genre. The UAS promotes minority Action Filmmaking through various media outlets, facilitates distribution and encourages new interest through the building of strong networks and key sponsorship participation. The UAS inevitably inspires minority interest in the art of Action Filmmaking through information, education, networking and development. The Urban Action Showcase also endeavors to encourage major studios to both include and pioneer more ethnically diverse casts and projects in the Action genre.

Black Salt is a multifaceted transmedia project with strong international appeal.  This story is an epic thriller merging the world of modern-day espionage and political intrigue with the ancient world of martial arts. The franchise includes, but is not limited to, the following: Black Salt collectible items, all with integrated branding opportunities:  Apparel Line, Comic Books, Trading Cards, Toys, Animated Series, Video Games and Feature Film Trilogy. Ratti Entertainment, LLC will produce, distribute and market the short film as part of the next phase of the strategic multi-media marketing campaign to cross promote all products under the Black Salt brand. The short film is also a precursor to the Black Salt feature film.

Demetrius as come aboard as a producer on the short film project. Demetrius and Owen both know in order to be successful they have to create their own distribution model. The goal is to market and promote the short film as if it were a major feature film release and more importantly, to implement the Distrify distribution platform to monetize the Black Salt short film. This will be accomplished through internet marketing, submission to 60 major film festivals, video on demand distribution, pre-orders and setting up as many online affiliate distributors by embedding our film trailer (and shop) on as many websites, blogs, forums and social networks. Secondly, as we promote the short film, the Company will simultaneously push the digital comic book series/graphic novel and the apparel line to establish the project as a bankable intellectual property.

The moment would start by setting up the distribution website and affiliates and urging everyone to support by pre-ordering the VOD. The test would last until the Urban Action Showcase on November 7 and 8, 2014 in New York. If the model was successful, we would start helping fellow filmmakers implement the distribution model to their short film projects.