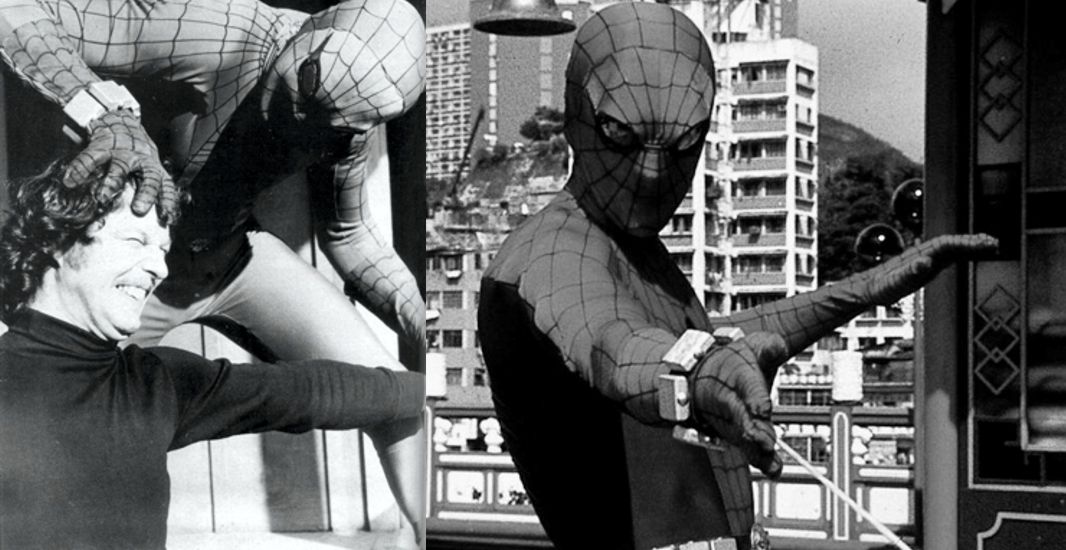 It is the 30th Anniversary of this Inside Kung-Fu article entitled Emil Farkas vs The Amazing Spider-Man, and we still give kudos to Emil Farkas for his innovative fight choreography and stunt coordination. He also played a great villian, Benson, taking on Spider-Man with real finesse.

By Stuart Sobel ~ If a person possessed the powers of a spider, he would have immeasurable strength. He could spin a web or leap 30 feet into the air. In addition he would have the ability of walking on the side of a building as well as transporting himself across a ceiling. But perhaps most of all, he would possess a highly developed sixth-sense to danger.

The result is the premise of the fictional Marvel Comics character entitled The Amazing Spider-Man. We are not going to reveal any Hollywood secrets on how Spider-Man turns pure fantasy from the funny papers into pseudo reality on film. We are going to delve however, into the creation and execution of fight scenes, not unlike those fabulous fisticuffs that did appear on the recent CBS presentation of Spider-Man, by talking with the man responsible for them. Emil Farkas has been a familiar name and face around the film studios of Hollywood for almost a decade. He has worked on dozens of pictures from The Killer Elite to Easy Rider. His television shows are countless, but include among them such action packed programs as S.W.A.T., Mannix, The F.B.I. and Mod Squad. Aside from instructing karate students in his Beverly Hills Karate Academy and writing The Complete Martial Arts Catalog and the soon to be released Fight Back — A Woman, Guide To Self Defense) he works with actors and actresses on techniques of film fighting as well as with film directors on making action packed fights exciting. Farkas was the creator of those thrilling fights in the two hour pilot for television. Because of the dynamic action along with the high ratings, the prospects are excellent for television viewers to enjoy Spider-Man as a series next season. In this show Farkas played the character Benson, the deadly cold blooded rate henchman for the evil villain Mr. White. Farkas has revealed to us in a behind the scene glimpse at what it takes to put together a fight scene for films and what he had to deal with in the Spider-Man show.

IKF – Why did the production company decide to use martial arts in this fantasy oriented program?

FARKAS – The author of the script, Robert Janes, probably felt that Spider-Man, being a super hero with fantastic athletic abilities, should have someone with unique fighting abilities to be his Nemesis. Martial arts contains a multitude of fighting techniques, which are visually pleasing if done correctly. It was a good way of show-casing Spider-Man’s unusual fighting style.

IKF – What type of fighting style are you referring to?

FARKAS – He displayed more of a ducking/weaving style, almost like the Monkey Style in kung-fu. Very evasive and elusive in his manner of defense. He was never the aggressor per se. We tried to make him appear almost animal like in his techniques, which is the back bone of many kung-fu styles.

IKF – How many fights did you create for Spider-Man in this two hour series?

FARKAS – I set up five fight scenes in the show and Benson (Farkas) was really the only character that he did any hard fighting with. Angel (Richard Kyker) actually was the more sinister of the two henchmen because of his size, but there were never really any hand to hand combat encounters, except for a couple of quick incidents.

IKF – The show had a lot of action, but there was no blood drawn nor guns fired. Why did the script stay away from the usual violence?

FARKAS – Being under the critical eye of the family hour censor, certain restrictions had to be delt with. That comes into play with shows that air at certain hours of the evening.

IKF – What type of restrictions does the family hour impose?

FARKAS – I believe that it works this way. In a 30 minute tirne spot a script can have two pieces of action. For ex-ample, kicking someone (one kick) is considered one piece of action. Punching someone is considered an ac-tion. We were lucky in a sense because it was claimed that in our show one whole fight scene was one piece of action. Apparently CBS agreed. They probably went abng with the idea because Spider-Man is really a fantasy of someone’s imagination. The action was therefore never between two real-to-life human beings because Spider-Mari is a made up person. The kids, who the family hour was ins-tituted to protect from television violence, would accept the fact that a fight between Spider-Man and anyone else could never really happen.

IKF – Was there any unusual problems in dealing with fighting techniques for a fantasy character?

FARKAS – There were some. In working with Spider-Man’s ability to jump high, for example, I had to use weapons to give me the extension we needed to sell the scene. One technique is known as reverse fighting.

IKF – What does that mean?

FARKAS – That refers to any technique that would have to be done backward because Spider-Man’s actions would also come out in reverse. It meant if he were jumping up on a high object, like he did on the roof-top fight where he leaped onto the air conditioning unit about 10 feet up, actually jumped down from the unit and then the film would be run backward. If I was shown in the same shot, my action would have to be reversed too so we could be in proper sync. It is a somewhat sophisticated method, but it works real well.

IKF – What were some of the other tricks the production people used in order to make the fights look good?

FARKAS – The use of the helmet camera put the viewer in a first person perspective with the action. It actually makes the audience feel the action. The camera is specially mounted on top of a helmet that the stuntman wears. When he bobs and weaves the camera goes with him in a natural movement.

IKF – In working with many fights, what were some of the major considerations in forming the action?

FARKAS – Primarily, each fight had to be different from one another, otherwise the audience would catch on to the repetition and become bored. Therefore, we had to take into consideration some of the props that were available.

In one scene I used a lead pipe end in another the nunchaku. We broke statues and vases during fights and we had Angel go through a break-away window. Props are very important. It took almost a week of planning to work it out.

IKF – How do you go about doing that?

FARKAS – I first study the script and then rough out the action on paper. It must be taken into consideration the time each action should take and the type of moves that should be used to make it work on film. The stunt coordinator, Freddy Waugh who also plays Spider-Man in costume, and I went over each move step by step. By the time we started filming we knew what we had to do. It was then left up to Ron Satlof, the director, to give the okay or to make modifications.

When a director wants changes or gives any kind of technical instructions you have to be able to speak his language. You have to understand what he is talking about when he refers to certain lighting techniques and camera angles. Modification generally means we have to make changes in a hurry. A cast and crew won’t sit around for three hours while you dream up a new fight scene. You have to have alternative plans and hang loose enough to change the original fight plan you had been working hours on in preparation. This particular show had double the work than what actually appeared on the tube.

FARKAS – Because there were two different versions of the same show that was produced. The family hour was a so called soft core version for American television. There was also a two hour feature film which might be called the hard core version. This one will be. distributed throughout Europe and the Orient. The only real difference between the two is in the theatre version there was more body contact and the fight scenes were longer. In one sense it made the work more of a challenge because I had to come up with two different versions for the same fight.

IKF – Why don’t you give us an example.

FARKAS – We were doing a fight in Mr. White’s (Robert Alda) mansion up in the mountain side area of Mulholland Dr. in Hollywood. There was a 4% foot brick wall in the patio. On the other side of the wall was approximately a 200 foot drop at a 45 degree angle. The director wanted me to do a flying jump kick at Spider-Man, miss him, and fly over the wall. Just to prepare for that we had two large mattresses and 20 people from the crew become a human fence to hold the mattresses as well as to stop me from rolling down the hill. When I missed Spider-Man and went flying over the wall that ended the fight. For television we ended the fight when he tied my hands between a pole. A much tamer version.

IKF – You are generally thought of as more of a behind the scenes player, making other actors look good for their fights. How does it feel to work on a fight that you have created?

FARKAS – Actually it was much easier because I know what my capabilities are. I could pull from a much larger bag of tricks for that reason. Since the Spider-Man role was not that of the aggressor, he did not have to initiate the action. He merely moved out of the way of my attacks. That meant I could call on large exaggerated moves to make the fights that much more exciting.

IKF – Do you enjoy your position in front of the camera as well as being in your usual place on the other side of the lens?

FARKAS – It’s interesting. Working behind the scenes is enjoyable, but I am finding out very quickly that being in front of the camera also has its own rewards. For one thing the pay is better. For another I can’t deny that there is a certain pride that I feel when people call after viewing the show and say they enjoyed the fights and that I look good on film.

IKF – Do you plan on becoming more involved in acting?

FARKAS – Definitely, Since Spider-Man I have had people in the industry approach me to do a martial arts film as the lead player. Frankly, I am considering it. Presently I am involved in an acting class. If the right script comes up would do it.

IKF – In the meantime do you think that we can look forward to seeing you in future episodes of Spider-Man?

FARKAS – I’ll answer that question in this manner. I certainly hope so.