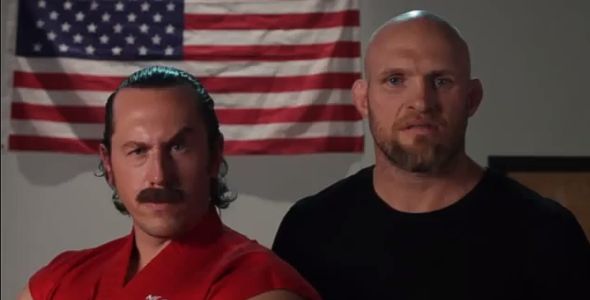 Television director Adam Rottler knew just how gigantic the task in front was. Six-foot-three and 185 pounds, to be exact. Rottler, a whisper of a man at 5-5 and 135 pounds had the monumental — and scary — job of telling Keith “The Dean of Mean” Jardine what to do when the MMA superstar guest starred this fall on the underground web series Enter the Dojo.

And if his directions to one of the fiercest men ever in the octagon didn’t go over so well? “I think I might’ve been able to outrun him,” Rottler says of his exit strategy.

The director discovered he didn’t need to. “I expected someone who spent their entire career kicking ass to be less friendly,” he says. “It’s totally not fair in hindsight. [Jardine] made it really easy, he was really accommodating with anything we had to say. He was really excited to be there and, as it turns, out, a good actor, too.”

Jardine is the latest MMA luminary to appear on Enter The Dojo — a YouTube-based comedy series that is to American martial arts schools what NBC’s The Office was to workplaces everywhere: a show with punchlines as funny as they were true. In five to 12-minute, mockumentary-style episodes, Enter The Dojo chronicles the uproarious teachings of Master Ken and his motely crew of students as they study Ameridote, the only martial art form that, according to Master Ken, isn’t “bull—-.” Even top-rated MMA trainer Greg Jackson and fighter Julie Kedzie appeared on the show, and learned that everything they knew about MMA was, according to Master Ken, “bull—-.”

The show posts its special holiday episode Dec. 18 and has attracted more than two million views online and lists nearly 14,000 subscribers — many of them professional fighters themselves. After a wrestling session at Jackson/Winkeljohn’s gym last week, professional fighters like John Dodson, Isaac Vallie-Flagg, Kedzie and Michelle Waterson started talking about their favorite TV shows. Enter the Dojo earned an honorable mention.

Kedzie learned about the series after she walked into Jackson’s office and found him cracking up as he watched the show. “I watched the entire series, like, in an hour,” she says. “It was just the funniest, funniest thing I’d ever seen.”

Enter The Dojo web series is the brainchild of television writer and Okinawa kempo black belt, Matt Page, who plays Master Ken. When Page left his hometown in Maine years ago, he also left behind his home dojo, a traditional Japanese school. As he bounced around Southern California and New Mexico he discovered franchised dojos — aka McDojos. “They were really wacky,” he says. “They had crazy techniques, crazy instructors, crazy uniforms. I didn’t know that schools like that existed. I also experienced some instructors that said and did things that I put directly into the show. Things that are not made up. Things that you wouldn’t think would happen at a real martial arts school but they happened to me.” Take, for example, the second episode of the series, “Destroy the Groin,” in which Master Ken mandates groin-only sparring. That happened to Page in real life. “And he paired me with a woman.” Paige translated the experience onto the screen. “I thought maybe other people would find this funny.”

Others have not only found it funny, but true.

The episode called “Kill Face” in which Master Ken teaches his students to make a disturbing facial expression — a hallmark of Ameridote — also stemmed from Page’s real-life experiences. And if you ask Kedzie, her very own expressions. When she watched the character, Rachel, an ardent Ameridote disciple, stick out her chin to make her kill face, Kedzie couldn’t help but laugh. “I was like wait a second, I think she doing of a mockery of how I am.”

But not everyone is in on the joke. Scrolling through the YouTube comments reveals that some viewers, confused by the mockumentary format, think Master Ken is real. Others in the “Ninja community”, as Page calls them, have threatened the show’s creators for mocking them.

The show has also had its real-life, not-so-funny missteps. In the middle of Season 1, Master Ken conducts a women’s self-defense class that, depending on the viewers’ sensibility, ranges from coarse to downright offensive. “We pushed our luck,” says Page. “We thought it was funnier than it was.” Page is regretful but not exactly apologetic. “If you’re going to do comedy, you’ve got to push the envelope a bit.”

That learning curve is about to dramatically slope upward. Page has been shopping the show to network executives in Los Angeles, trying to find it a traditional television home. He’s also exploring transferring the web characters to the big screen in a feature film. “We’re pumping the breaks a bit,” says Rottler of the prospect of a third season. But to the many shows fans — and fighters—not having another batch of Enter The Dojo episodes would be, in the words of Master Ken, bull—-