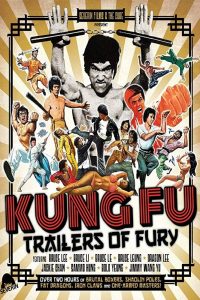 Over the decades, there have been quite a few compilations of classic grindhouse movie trailers on VHS, DVD, and now Blu-Ray. For those of you who have never experienced going to Grindhouse or Chinese First Run theaters, this can can be the closest experience you might have to it- minus the cheap creaky seats, sticky floors (sorry but saat kei ma 薩其馬aka soft flour cakes, dried shredded cuttle fish, prawn crackers and coconut soda are not included in the price of the DVD or Blu-Ray.

All the trailers are in its original widescreen format.

The trailers have been scanned in 2k resolution, however they have not been remastered. The trailers still have scratches, color washout, and dirt on the picture as well as audio pops and some leveling issues. They have added English subtitles in many places where the original trailer did not have any. The trailers are in fair to good condition considering their age.
Here is the list of trailers on the single Blu-Ray disc.
Ways of Kung Fu
Fists of Bruce Lee
Kung Fu vs. Yoga
Death Blow
Two Champions of Shaolin
Golden Dragon, Silver Snake
Daggers 8
Secret of the Shaolin Poles
The Happening
Snake in the Eagle’s Shadow
Story of the Drunken Master
Chinese Kung Fu Against Godfather
The Invincible Swordsman
Return of Bruce
Bruce Le’s Greatest Revenge
Shaolin Iron Claws
Fast Fingers
My Kung Fu 12 Kicks
Brutal Boxer
Blacklist
The Damned
Bruce’s Deadly Fingers
One Armed Chivalry Fights Against One Armed Chivalry
Way of the Dragon (UK Trailer, incomplete abruptly ends)
Hong Kong Connection
Chinese Kung Fu
18 Shaolin Disciples
The Blazing Temple
Shaolin Wooden Men
The Magnificent Boxer
SPECIAL FEATURES

I truly respect Mr. Myers for being one of the first western journalists to discuss Kung Fu movies and review them in martial arts publications in the 70’s and 80’s, but unfortunately he has not caught up with the times and tends to often talk without checking the facts. Being a native Chinese speaker, his butchering of the names was much like “nails to a chalkboard.” Meyers constantly spews a revolving door of inaccurate facts like…
#1-“Shaw Brothers never gave women a chance to be the lead in films…” The reality is the Shaw Brothers were dominated by female stars in the 50’s and 60’s and had an abundance of lady action stars that dominated the box office like Chang Pei-Pei, Kara Hui Ying Hung, Lily Ho, Shih Szu. Please note: Myers then contradicts himself in the feautette “A Brief History of Kung Fu movies” (also on this blu-ray) where he notes kung fu cinema was mainly ruled by women before Chang Cheh started making movies at Shaw Bros.
#2- “Ti Lung did not have any prior martial arts training before getting into movies. He was just a dancer and an actor.” The truth is Ti Lung was a Wing Chun practitioner before he started working at Shaw Bros.

Mr. Myers errors on this blu-ray can take up several more pages. What he states as facts are borderline false rumors. In my opinion, as a film historian, Myers has breached journalistic integrity of ethics and standards and is is doing a real disservice the the martial arts film genre. In comparison, the comments by Michael Worth (Filmmaker and author of “The Bruceploitation Bible”) and Rick Stelow (TV show Editor and owner of Drunkenmaster.tv) were well researched and lively… when they can get a word in edgewise.

In closing, the trailers found in this compilation are classic and many you might not be able to find elsewhere. Despite what I mentioned about the audio commentary, this disc is very highly recommended on just the trailers compilation alone. A must have for Grindhouse and Kung Fu movie fans! And rumor has it that Severin Films will come out with a sequel to this compilation with more rare kung fu movie trailers. More reasons to celebrate!!!