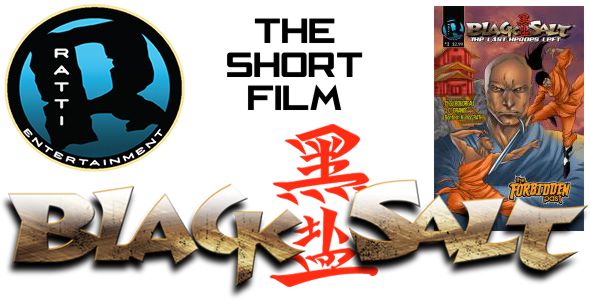 Columbus, OH — (ReleaseWire) — 02/06/2014 — Ratti Entertainment LLC has announced today that the Black Salt comic book series is in development for a proof of concept film short. Philip Daay and Owen Ratliff have penned the script. Ratti Entertainment, LLC will produce, distribute and market the short film as part of the next phase of the strategic multi-media marketing campaign to cross promote all products under the Black Salt brand. The short film is also a precursor to the Black Salt feature film.

Creator Owen Ratliff and CEO of Ratti Entertainment LLC is bringing some martial arts cinema star power to hardcore fans that regularly follow the genre on all levels, including Ben Ramsey, the director of the Michael Jai White 2009 action vehicle, Blood and Bone, and its currently-developing sequel. Also on the list are martial arts action superstar James Lew, who carries an amazing body of work over the course of three decades in TV and film; actress and stuntman Michelle Lee, whose most-recent notable appearance came in the second season of Kevin Tancharoen’s highly-acclaimed webseries, Mortal Kombat Legacy, and actor and veteran stunt performer and coordinator Arnold Chon, whose resume also includes Blood and Bone among a list of prominent TV shows and Hollywood action movies, in addition to the upcoming release of boxing prequel drama, The Bronx Bull..

Ratti Entertainment LLC is looking to Indiegogo to crowd-fund his project, which will not only help provide a leading actor for the role of Black Salt, but to grant fans a high-quality short film production that folks can enjoy and to use as a viable proof-of-concept to pitch to investors for the feature film that is ready for pre-production. The creators are offering some great rewards for fan participation; from executive producer credits, pre-order the short film, digitally draw you as a Black Salt comic book character, props from the set and Black Salt apparel just, to name a few.

Ratliff is asking our fans and the public to help us produce the short film project by supporting one the perks, like us on Facebook and spread the word to all their friends and family.

View the funding campaign on: http://www.indiegogo.blacksaltfilm.com/

The Black Salt franchise includes, but is not limited to, the following: Black Salt collectible items, Apparel Line, Comic Books, Trading Cards, Toys, Animated Series, Video Games and Feature Film Trilogy. The Company’s main goal is as we promote the short film we will simultaneously push the digital comic book series/graphic novel and the apparel line to establish the project as a bankable intellectual property.

“We’re very excited about the film short. We feel that this will be instrumental in enhancing our branding and marketing endeavors for Black Salt and our other projects” said Owen Ratliff, CEO of Ratti Entertainment LLC.