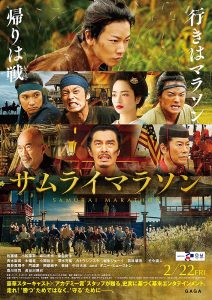 To prepare his warriors for potential attacks by American imperialists, the hanshu, or Lord of the land, holds a marathon. The marathon runs along a mountain path crisscrossing shores, forests and mountains for about 58 kilometers. A prize is offered to the winner of the marathon. The marathon is mistakenly viewed as an act of treason by the central Edo government and they send spies and moles to the hanshu’s castle including Jinnai Karasawa (Takeru Satoh), who appears as a normal samurai at the han, and not the spy he actually is for the central government. Jinnai Karasawa knows that assassins have been sent to the hanshu castle but when he realizes that the Edo government has misunderstood what is happening, Jinnai must stop the assassins and clear up the misunderstanding, but to do so he must run the race desperate to win and save lives.

Samurai Marathon 1855 (2019) is based on novel “Bakumatsu Marason Samurai” by Akihiro Dobashi. The book was published in 2014 by Kadokawa Haruki Corporation.