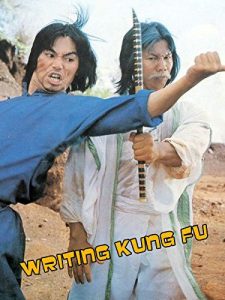 The action is director by stunt coordinator’s Yiu-wah Cheung and Hsin San.

“First of all you have to practice honesty, keep your temper, never lose control of yourself, be patient. If you learn to do these things you can master anything.” ~ Wu-lang Chang

Writing Kung Fu (1979) is a story about Red Clay Village which is populated with uneducated children, many whom are orphans. Many of the adults are unscrupulous, and others alcoholics. The village is thrown into chaos when Yan (Bolo Yeung) comes to town and because he has money he is welcomed.  But he is really a crazed martial arts master who uses his kung fu skills for evil as an sadistic assassin, rapist and thief. Chaos takes over the village and the village teacher Wu-lang Chang (John Cheung) is tormented to no end as his scholarship is considered weakness. He gives up teaching and is driven out of the village, running away and leaving his student to train only in kung fu, without any moral lessons or education. Learning a much more poetic style of kung fu from a homeless old man, the embittered teacher realizes his mistake and even after the old man  is killed, Wu-lang continues to train, mastering the esoteric style of Writing Kung Fu. The scholar then builds up the courage to return to Red Clay Village and take a stand against Yan and fight for truth, justice, and the traditional Chinese way of life which must include scholarship and kung fu.

“Justice always triumphs in the end and the criminal is brought low. The cries of the dead fall silent.”

“The pin is mightier than the sword”. ~ Edward Bulwer-Lytton