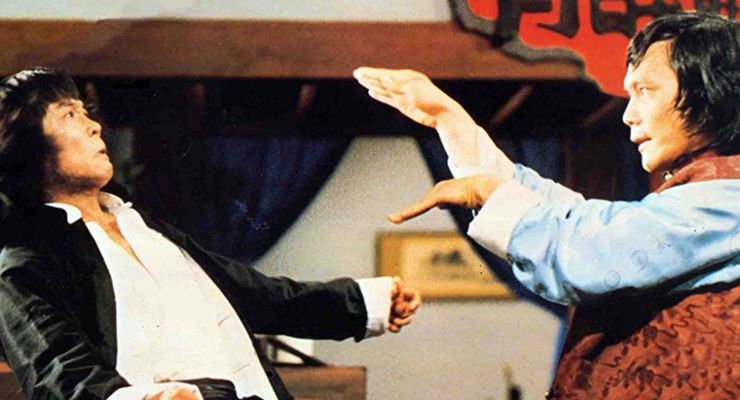 Hitman in the Hand of Buddha (1981) is a movie produced by cooperation between Korean and Hong Kong. The film is directed by Jang-lee Hwang and co-directed by Wai Yeung and Yun Gyo Park. This was the first and the only film that Jang-lee Hwang produce in his own production company, and he not only directed and produced the film, he also starred in Hitman in the Hand of Buddha (1981). Another first, Jang-lee Hwang plays the hero, without his mustache, one of the few roles where he appears as the good guy. The action sequence was choreographed by Yuet Sang Chin, Corey Yuen and Hoi Mang.

Wong Chin (Hwang Jang Lee) is the good guy for a change in his movie, Hitman in the Hand of Buddha (1981). When his brother in law (To Siu Ming) is badly beaten by rival rice shop thugs, Wong Chin steps in to defend his brother-in-law with some impressive kicking techniques, only to discover that his brother-in-law is cheating on his wife, Wong Chin’s sister, at a brothel. Wong Chin goes to work in the rice shop and when the thugs return to wreak havoc they are once again put in their place by Wong’s superior fighting skills. When the thugs are humiliated by Wong’s beatings, they call on Mr. Shen (Yeung Wai), the local Kung Fu expert and offer him a deal to fight Wong Chin. Shan Hao (Tino Wong), the real Mr. Shen, overhears the plan and he steps in to give the imposter a lesson he won’t forget. Soon a deal is struck for Wong Chin’s life and Wong Chin is invited to dinner by the rival gang, not realizing he is going to be killed, Wong Chin must fight for his life and dispenses Mr Shen’s snake fist without even breaking a sweat.

In the sub-plot of Hitman in the Hand of Buddha (1981), Beggar Fan (Mei-Sheng Fan), leads a gang of vagrant kids into a life of petty crime, and they are robbing and stealing from whoever they can to fill Fans pockets. When one of the kids steals a snuff bottle from notorious badman Tiger (Eddy Ko Hung), Fan seeks to return the bottle. True to countless Fu story-lines, Tiger turns out to be Mr. Shen’s master and the two rogues seek out Wong Chin together. In the melee that ensues, Tiger gives Wong Chin a sever beating before Beggar Fan steps in to save Wong Chin’s neck. Beggar Fan (Mei Sheng Fan) suggests Wong Chin go to the Shaolin temple. While at the Shaolin temple, Wong Chin causes all kinds of problems as he has no patience, but he does manage to learn the Buddhist fist technique from the Abbott. Later Wong Chin learns about inner strength and patience and is thanks the Abbott for everything he’s learned at the temple. Wong returns after the training and discovers that Mr. Shen has raped his sister leading her to commit suicide. with revenge on his mind and quickly disposes of Shen and Tiger with a help from Beggar Fan.