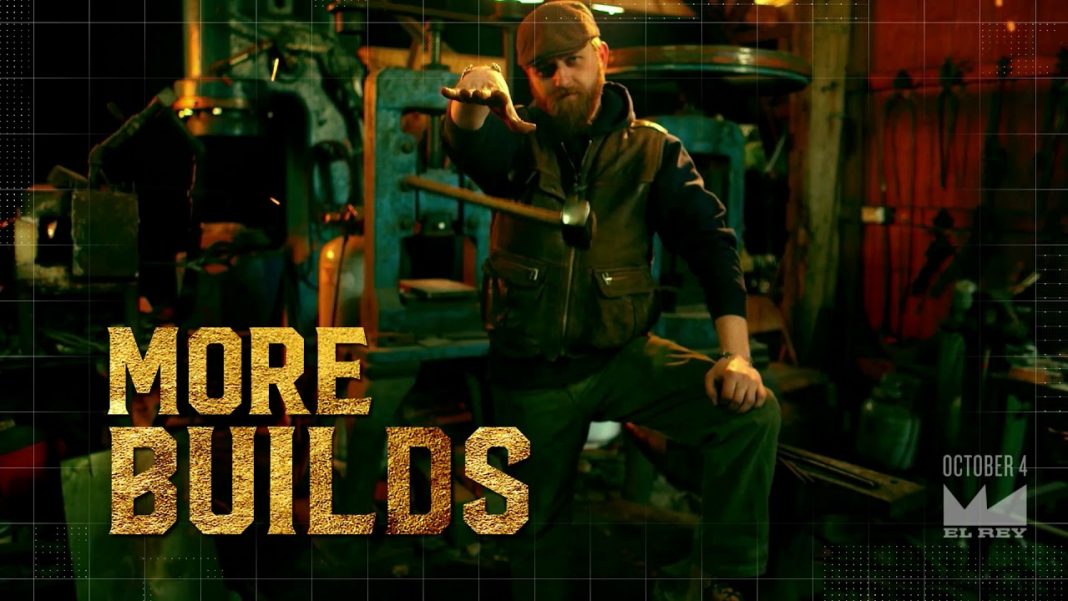 AUSTIN, TX (August, 15 2018) – El Rey Network announced today that the original unscripted series “Man at Arms: Art of War” will return for an all-new second season on Thursday, October 4th at 8PM ET. Danny Trejo (Machete, Sons of Anarchy) and the team of weapon experts and blacksmiths return with ten epic new episodes featuring arms and armor from ancient Japan, China, Philippines, and Persia. The “Man at Arms: Art of War” expert craftsmen will also craft arms and armor inspired by iconic pop culture, comic books, movies, video games, and TV shows, while the intrepid team of weapon experts will put these arms to the ultimate tests. Join Danny Trejo and his team as they build and unleash some of history’s deadliest weapons in this season of “Man at Arms: Art of War,” premiering on Thursday, October 4th at 8PM ET on El Rey Network.

The second season will continue the collaboration between El Rey Network and DEFY Media, the media company that created the celebrated digital series “Man at Arms.” Iconic weapons and armor have played a starring role in some of the most memorable scenes in movie history and can be found throughout pop culture, from movies to video games to comics to TV shows. In each episode of “Man at Arms,” a team of expert craftsmen skillfully recreate famed weapons and armor from scratch, using both the technology that would have been available at the time such weapons and armor were originally created, as well as state-of-the-art technologies beyond the original forgers’ wildest imaginations, to create historical, modern, and mythological works of martial art. Each masterwork is then tested by experts for its strength and real-world functionality. Whether it slices, shoots, smashes, stabs, blocks, parries, or disarms, viewers will get a first-hand look at what kind of force each marvelous masterpiece can unleash. DEFY Media’s award-winning digital series, which has released over 150 episodes (and counting), consistently averages over 1.5MM views per episode, and has built a vast and passionate fan community. “Man at Arms: Art of War” is produced by DEFY Media and presented by El Rey Network.

Danny Trejo has developed a prolific career in the entertainment industry with a hard-earned and atypical road to success. From years of imprisonment to helping troubled youth battle drug addictions, from acting to producing, and now on to restaurant ventures, Trejo’s name, face, and achievements are well recognized in Hollywood and beyond.

Trejo has starred in dozens of films including DESPERADO, HEAT, the FROM DUSK TILL DAWN series , CON AIR, ONCE UPON A TIME IN MEXICO, the SPY KIDS movies, MACHETE and MACHETE KILLS, the BAD ASS trilogy , Universal’s DEAD IN TOMBSTONE and DEAD AGAIN IN TOMBSTONE, Rob Zombie’s HALLOWEEN and his up-and-coming 3 FROM HELL. In addition, Danny co-starred in DEATH RACE 2, DEATH RACE: INFERNO and MUPPETS MOST WANTED.

On the television side, Trejo will be returning to El Rey’s MAN AT ARMS as a host for the upcoming second season. He has also appeared on THE FLASH , MODERN FAMILY , BREAKING BAD , BROOKLYN NINE-NINE , and KIDDING starring Jim Carrey among others. Additionally, Trejo voices characters in the animated films STORKS and THE BOOK OF LIFE , along with the animated series AMERICAN DAD! , RICK AND MORTY , PUSS IN BOOTS , YOUNG JUSTICE and FAMILY GUY . He recently collaborated with Jam City and Family Guy on the new app “Family Guy: Another Freakin’ Mobile Game.”

Trejo recently finished shooting the comedy GRAND DADDY DAYCARE starring alongside Reno Wilson and the horror comedy THE HOUSE NEXT DOOR , starring Michael Epps and Kat Williams. And if you didn’t think he was busy enough, after the success of openings of the flagship restaurant Trejo’s Tacos in the Mid-Wilshire area, Trejo’s Cantina in Hollywood, and two newer locations in Woodland Hills and USC village, more restaurant openings are in the works. Mr. Trejo recently hosted

the 1 year anniversary of Trejo’s Cantina in Pasadena. Danny’s more recent culinary endeavor, Trejo’s Coffee & Donuts, has proved to be just as successful as his restaurants. Despite Danny’s impressive list of credits, it is his continuous role as a devoted father of three and an intervention counselor that bring him the most satisfaction.

DEFY was built on the idea that media should be as meaningful and dynamic as the audiences it’s made for. They did that by creating expansive and authentic content brands – SMOSH, Clevver, AWEme, BREAK and Made Man – that young people obsess over. Powered by in-house studios and the most adept talents and producers, DEFY was uniquely scaled its digital sensibility, expanding 75 regularly scheduled programs across more than 25 video platforms, including SVOD, television and film. In a world where viewers held the power, DEFY’s brands had earned more than 110 million followers on YouTube and the world’s largest social platforms combined, driving more than 800MM total video views each month through content that matters to young audiences. On November 6, 2018, the company ceased operations.