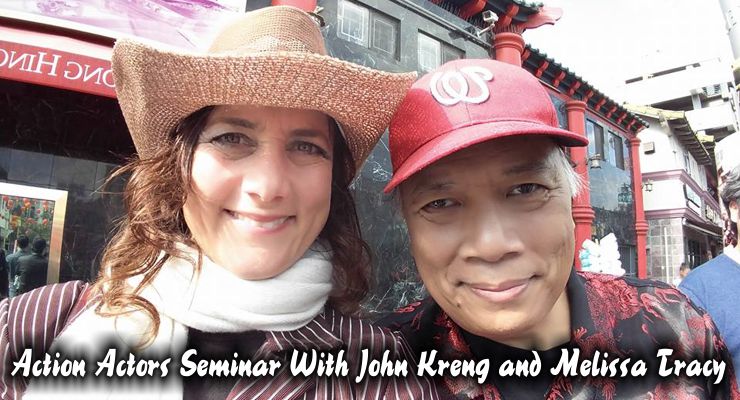 Where: Los Angeles, CA 90016
When: August 25, 2019 for 12 Consecutive Weeks (Minus Holidays)
Can’t start on the above date, fill in contact form at the bottom of this page to let us know about your interest.
Class Limit: 20 Participants
Time: Beginner & Intermediate Class meets from 5:00pm – 7:00pm
Time: Advance / Professional Class meets from 7:00pm to 9:00pm (Invitation Only)

Each person will work on camera and will have their work screened at the graduation ceremony at The Martial Arts History Museum in Burbank, California.

Are you prepared for your next action role?

Want to be the next action star or be a more marketable actor?

Learn the basics of film fighting in our Action Actors Seminar.

Often times a director or producer will assume you already know how to perform action. Don’t come to set unprepared! You can easily get hurt, even if it is a simple stunt!

Class Curriculum
This Action Actors Seminar which teach you what film schools and acting classes do not teach!

You will be learning:

What is a Stunt

Being Prepared For The Set

1. Why do certain actors make great action stars and some do not … and much more!

No previous martial arts, fighting, or stage combat experience is required to participate. A certificate of completion will be given out to each participant with perfect attendance.

Tuition Fee:
$525.00 for 12 weeks (Payment arrangements can be made and we take credit cards, cash, and Paypal)
Tuition Fee includes :

Cash, Credit Cards, and Paypal accepted.
No refunds will be given for cancellations or missed classes.

John Kreng the CEO of a LA based Production company, as well as a 2nd Unit Director, Stunt/Fight Coordinator, Action Film Historian, and Author of the textbook “Fight Choreography: The Art of Non- Verbal Dialogue.” As a stunt professional he has worked with Jet Li, Tsui Hark, David Carradine, Steven Spielberg, Roger Corman, Don “The Dragon” Wilson, and Yuen Cheung Yen, to name a few.

Past clients include The Los Angeles Times, The Weinstein Co., College Humor, SNK, TH-Q, FX Channel, Epix, A&E, Spike, Telemundo, Subaru, TBS, and Telemundo.
John was a Producer, Stunt/Fight Coordinator, and one of the lead actors on BATTLE B-BOY. He can be currently seen in Paramount’s THE SCOUTS GUIDE TO THE ZOMBIE APOCALYPSE.

Melissa Tracy is an CEO of an Independent production company in Los Angeles. Actress/Action Actress/Writer/Director/Producer/ 2nd Unit director/Fight/Stunt Coordinator. Melissa was seen last week on the big screen at the Chinese Mann Theaters and theaters throughout the US in the feature film Martrys as the creature acting and performing a number of stunts including numerous fight and weapon scenes.

As a director and Action/2nd unit director, the projects she has worked on have won awards at the Action on Film Festival and the Buffalo Film Festival and have been featured and shown at Cannes. Melissa’s Action Project Best Projection was distributed in 2006 through Spike TV. Her TV Adventure Series Hook Up is currently in negotiations for 2017 season.

Melissa is currently packaging two films and one currently in post on a TV show. She is preparing to direct and Action direct films this summer and fall!,

Melissa has stunt coordinated a number of films and TV pilots, plus music video for Andrew Lane (Backstreet boys).

Melissa has also produced a number of action projects.

Melissa has worked as a action actor and stunt professional for over 10 years. She has a background in different martial arts including Savate, Kali, Ninjitsu, JKD, boxing, kickboxing, western and eastern sword play and extensive weapons experience. She has 30 years of dance and acting. Melissa graduated with a BA from California State University Fullerton.