Dragon: The Bruce Lee Story (1993) is the story of Bruce Lee and his overnight rise to stardom. Although his reign was way too short, he was one of the most charismatic action heroes in motion picture history.

Dragon: The Bruce Lee Story (1993) is an American Action, Biography, Drama written and directed by Rob Cohen. The film stars Jason Scott Lee, Lauren Holly and Robert Wagner. It was released in the United States on May 7, 1993.

The film is based on the biography, Bruce Lee: The Man Only I Knew, written by Linda Lee Cadwell, the widow of Bruce Lee.

The role in this film was offered to Bruce Lee’s real-life son Brandon Lee, but he decline the role. Tragically Brandon Lee died in an gun accident on the set of the film The Crow (1994) in March 1993. His death took place less than two months before Dragon was release. Dragon: The Bruce Lee Story (1993) is dedicated to Brandon Lee’s memory. In the film Brandon was portrayed as a child by Iain M. Parker. 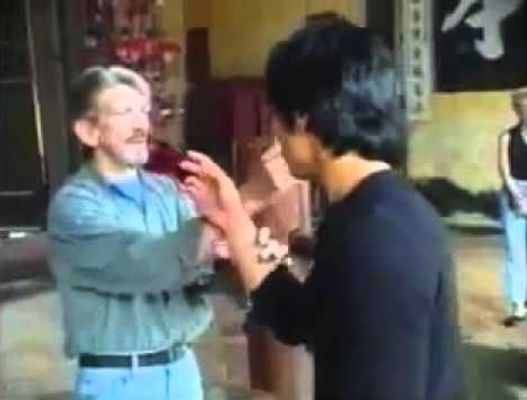 Beside training the actors, Jerry Poteet portrayed himself in the film. Poteet can be seen in the background of many scenes. Van Williams, who played The Green Hornet in the 1960s TV series of the same name also appears as the director of The Green Hornet in this film. Bruce Lee’s daughter, Shannon Lee, has a cameo appearance as a singer in the party scene, where Linda tells Bruce she is pregnant for the second time – carrying Brandon Lee.

Towards the end of the film, Bruce Lee is forced to look at a tombstone making him confront his demons. The tombstone is the tombstone of Bruce Lee. The picture is different from the real tombstone, but the date of birth, date of death and the epitaph are the same.

The film begins with Bruce Lee’s father, Hoi-Chen Lee, (Ric Young) in the midst of a nightmare in which his young son, Bruce Lee (Sam Hau), is being haunted by the terrifying phantom known as The Demon (Sven-Ole Thorsen) in black samurai armor. In a montage that passes quickly through his teenage years in Hong Kong, Bruce is shown receiving instruction in traditional Chinese martial arts. As a young adult, Bruce (Jason Scott Lee) fights with British sailors harassing a young Chinese woman, and this results in him having to leave Hong Kong. His father suggests that Bruce go back to the United States — Bruce was actually born in San Francisco, California when his father was on tour as a performer so Bruce Lee had a U.S. birth certificate. It is his father’s will that Bruce become a success, so the family name will be famous even back in Hong Kong.

In America, Bruce works as a dishwasher at a Chinese restaurant, until he is involved in a violent brawl that breaks out between four of the cooks. The restaurant owner (Nancy Kwan) arrives and fires Bruce. She gives him severance pay and an “all-purpose loan” and advises him to invest the money in a good education.

Bruce begins studying philosophy in college, and also teaches martial arts classes and this is where he meets Linda Emery (Lauren Holly). They marry in defiance of Linda’s racist mother (Michael Learned). Linda suggests that Bruce open a martial arts school, but his Chinese peers demand he not train “blacks or Americans” and they challenge him to settle the matter by combat. Bruce defeats Johnny Sun (John Cheung) in a secret, illegal, no-holds-barred honor match, but having little honor, Sun attacks Bruce even after admitting defeat, and he causes a crippling injury to Bruce Lee’s back.

Linda Lee is terribly upset that Bruce did not tell her about the match. She cares for him through the recovery process, in spite of his despair and his assumption that she will abandon him. It is Linda that makes Bruce begin to examine his flaws and weaknesses and eventually this leads to his develop of the fighting philosophy of Jeet Kune Do, which is published in The Tao of Jeet Kune Do. It is during this time that Linda gives birth to their first child, Brandon, which helps to soften their relationship with Linda’s mother and a  reconciliation occures.

Some months later, during Ed Parker’s martial arts tournament, Bruce faces Johnny Sun again, in a 60-second demonstration of his new fighting style. Johnny Sun appears to have the upper hand in the first half minute, but then Bruce dominates Sun, finishing by kicking him over the top rope into the crowd. The crowd goes silent and then erupts.

After the match, Bruce meets Bill Krieger (Robert Wagner) and is hired for The Green Hornet television series.

Bruce and Bill work together and create the idea for the Kung Fu television series. At a cast party, Linda says she is now pregnant with their second child. The Green Hornet is canceled, but Bruce looks forward to starring in the Kung Fu television series, but much to Bruce’s frustration, a Caucasian, David Carradine, is chosen for the lead role. Bruce feels completely betrayed by Bill Krieger.

Bruce loses his father and returns to Hong Kong for the funeral. While there Hong Kong film producer, Philip Tan, (Kay Tong Lim), informs Bruce that he has become famous in Hong Kong, where The Green Hornet show is called The Kato Show. Bruce begins work on the feature film The Big Boss (1971) or Fist of Fury. In the filming of one of the final scenes in The Big Boss, Johnny Sun’s brother, Luke, wants revenge and attacks, but Bruce is victorious.

The Big Boss is a success and Bruce is able to make several more films in Hong Kong, working as an actor, a director as well as an editor. This causes a rift between Bruce and Linda, becasue she wishes to return to the United States. Bill Krieger shows up, and although he knows that Bruce is still angry with him, he offers him a chance to work on a big-budget Hollywood movie, knowing that Linda wants to return to the States.

On the 32nd day of shooting Enter the Dragon (1973) during the climactic “room of mirrors” sequence, Bruce has a terrifying vision of the phantom samurai that has haunted his families dreams since his childhood.

However, this time, after being shown and then beaten up on his own grave, his rage and fear for his son brings him defiantly into the fight. He discovers a set of nunchaku allowing him to break the dark warrior’s neck and save them both.

The film ends during a shot of the final scene of Enter the Dragon (1973), the film that would make Bruce Lee an international film star. Linda shares with the audience that Bruce died before the movie’s release, and that she prefers to celebrate Bruce Lee’s life, not his death.

Certain scenes from Dragon: The Bruce Lee Story (1993) were deleted by British authorities, so the film would meet the age-rating prior to being release in the United Kingdom. The Lantern Festival dance party in Hong Kong (in which a British sailor who abuses a woman is confronted by Bruce Lee) was removed, and the fight between Bruce Lee and, near the end of the film, Bruce’s inner demon was shortened so that viewers cannot see Bruce Lee fighting with nunchaku. This took place because it was illegal to show visual depictions of nunchaku in the UK at this time. The scene stops with the demon’s mouthplate expelling spikes.