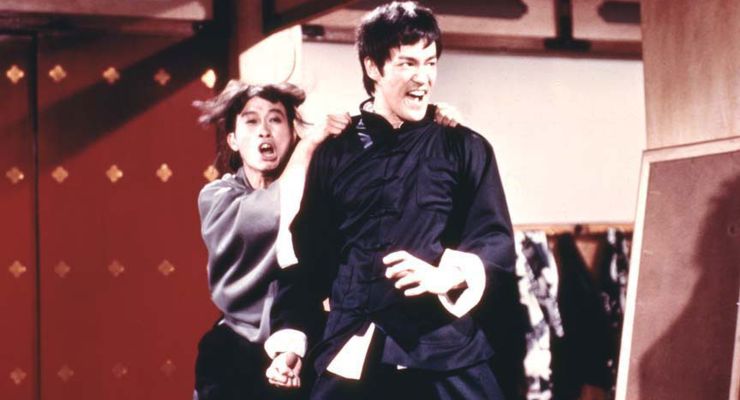 Fist of Fury (1972) was directed by Wei Lo, who also wrote the screenplay. The film stars Bruce Lee, Nora Miao and James Tien.

Bruce Lee’s student Robert Baker is a stuntman in the film and also plays the role of the sinister Russian. One of the best fight scenes takes place between Lee and Baker. Lee, with his cheeky grin, devastates his opponent, but not without teasing him and the audience along the way. Lee bites Baker and then behaves as though he just finished his dinner by wiping his face with his hand. After toying with Baker for a while, Lee finishes off his opponent with a kick to the head and a shuto strike or knifehand to the throat

Stuntmen in the film include Jackie Chan and Biao Yuen, a contemporary of Jackie, Sammo Hung and Jet Li, who is known as one of the most acrobatic martial artists ever. Wah Yuen, who was also a member of the Chinese Opera School with Jackie Chan and the others was stand in for Bruce Lee in Fist of Fury as the two had similar body types and because Wah Yuen was such a skillful martial artist that he could mimic any martial art technique necessary including that of Bruce Lee.

In Fist of Fury (1972) the kung fu instructor of Chen (Lee) is brutally murdered, so Chen sets out to find the persons responsible for the killing. When he discovers that the killers are a Japanese gang, and that they are terrorizing his former school, Chen brings swift and deadly retribution to the evildoers.

Note: Fist of Fury (1972) or The Chinese Connection (1972) made Bruce Lee famous and it gave the Chinese back their pride. In the movie, Bruce Lee breaks the silence about the Chinese people’s fear of the Japanese, who dominated them for years. It also changed fight choreograpy forever with the scene where Bruce Lee kicks seven attackers in a Japanese dojo. The scene was shot with a wide angle lens and it went into the movie completely unedited.