“Danny Trejo (Machete, Sons of Anarchy) will host the upcoming El Rey Network original unscripted series “Man at Arms.” The eight-part series will premiere on the network in early June 8, 2017.

As host of “Man at Arms”, Trejo will introduce each episode, preside over the expert roundtable of builders, historians and martial artists and participate in the weapons testing phase to see how much destruction they can cause.

“Who better to host a show celebrating iconic weapons in pop culture than ‘Machete’ himself, Danny Trejo?” asked El Rey Network president and G.M. Daniel Tibbets. “Danny is a longtime friend of our founder, Robert Rodriguez and also of El Rey Network. He brings the right mix of mentorship, humor and knowledge to ‘Man at Arms’.”

El Rey Network will bring the popular and celebrated digital series, “Man at Arms” to television in a co-production deal with DEFY Media, the studio that created “Man at Arms”. Iconic weapons and armor have played a starring role in some of the most memorable scenes in movie history and can be found throughout pop culture, from movies to video games to comics to TV shows.

In each episode of “Man at Arms”, a team of expert craftsmen skillfully reproduce famed weapons and armor from scratch, using both the technology that would have been available at the time such weapons and armor were originally created, as well as state-of-the-art technologies beyond the original forgers’ wildest imaginations, to create historical, modern, and mythological works of martial art. Each masterwork is then tested by experts for its strength and real-world functionality. Whether it slices, shoots, smashes, stabs, blocks, parries, or disarms, viewers will get a first-hand look at what kind of force each marvelous masterpiece can unleash. Based on the extremely popular YouTube series, “Man at Arms” is produced by DEFY and El Rey Network.

101 “Weapons of Kung Fu” – June 8 at 8:00pm et
Ancient China developed the honorable martial arts of Kung Fu and the weapons needed incredible precision and expert handling. The ji is a hybrid between a spear and a dagger-axe that has been used for over 3000 years. The wind and fire blade is used in pairs to slash, stab or disarm an opponent.

102 “Weapons of the Gods” – June 15 at 8:00pm et
India fostered some of the deadliest and most unique weapons including the haladie knife, a double-edged dagger with long blades to put distance between the weapon used and their opponent and the urumi, a flexible whip-like blade. 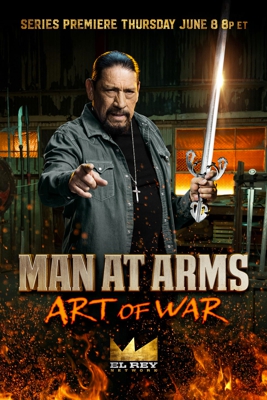 103 “African War Blades” – June 22 at 8:00pm et
Since the beginning of time, African civilizations have crafted some of the most lethal weapons known to the world including the Membele knife, a curved throwing dagger that was often carved to resemble a bird’s head and the Shotel, a sickle-shaped sword used to hook and rip invading soldiers off their horses.

104 “Weapons of the Mongol Horde” June 29 at 8:00pm et
The fearsome Mongol Horde carved out one of the largest empires in the ancient world through their ability to wield deadly weapons on horseback. The composite bow has a range of 820 feet and the ballista could shoot a heavy arrow with more accuracy than a catapult.

105 “New World Warriors” – July 6 at 8:00pm et
The Aztec Empire developed some of the simplest but most effective weapons to assist them in their savage battlefield tactics including the macuahuitl, a wooden sword with its sides embedded with prismatic blades sharper than steel razor blades and the Mayan’s long distance weapon – the atlatl.

106 “Weapons of the Pharaohs” – July 13 at 8:00pm et
The Armies of the Egyptian Pharaoh cut a bloody path through the ancient world, creating one the mightiest empires ever known. Using weapons ranging from the Battle Axe to the Khopesh, ancient Egypt ruled the ancient world.

107 “Stuff that Legends are Made Of” – July 20 at 8:00pm et
Explore the heroic swords behind the legends including the Arabian Zulfiqar given to Ali ibn Abi Talib by Muhammad and the Tuzin El Cid won from King Yucef.

108 “Weapons of the Rising Sun” July 27 at 8:00pm et
The Samurai, the mightiest warrior class the world has ever known, were famously known for their incredible use of the straight-headed spear the Yari and the Katana, one of the finest cutting weapons in world military history.