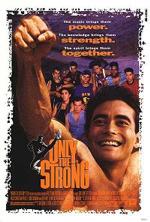 Only The Strong (1993) is a martial arts action film directed by Sheldon Lettich. It is considered to be the first Hollywood film that showcased the Afro-Brazilian martial art of Capoeira throughout the entire movie.

Only The Strong (1993) is about an Ex-Special Forces soldier, Green Beret Louis Stevens (Mark Dacascos) who returns to his hometown of Miami after completing military service in Brazil. He soon discovers that his old high school has become infested with gangs and drug dealers. He uses his Capoeira skills to rid the school of several drug dealers so one of his old teachers, Kerrigan (Geoffrey Lewis), sees the impact that Stevens is making  on the students and Kerrigan asks Stevens to teach Capoeira to the schools most at-risk students at an abandoned fire station.

The local drug lord, Silverio (Paco Christian Prieto), is also a master of Capoeira and he is not happy about his younger cousin, Orlando (Richard Coca), becoming one of Stevens’ students. Silverio engages Stevens in combat, beating him viciously, but this backfires and the  horrified Orlando resolves to learn everything he can from Stevens. Stevens’ students learn quickly and become very skilled at Capoeira. The principal is very pleased with what is going on and proposes a district-wide Capoeira program to the school board, but life is not so simple and all hell breaks loose.

Mark Dacascos was already a very talented martial artist, but he did not have a background in Capoeira. Mark began training with famed Capoeirista Mestre Amen Santo even before auditioning for Only The Strong (1993). Mestre Amen Santo was responsible for much of the fight choreography and he also has a small role in the film.

One of the best parts of Only The Strong (1993) is the music soundtrack. It features Capoeira music performed by Jibril Serapis Bey, Ilesa Anago Africa and “Amen” Santo. There is also hip-hop songs by Mellow Man Ace, Iki Levy, New Version of Soul and Miami Boyz. The most recognizable songs in the film are Jibril Serapis Bey’s “Paranauȇ” and “Zoom-Zoom-Zoom” – the latter being more well known as the theme song for Mazda’s TV commercials.