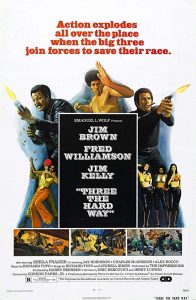 Blaxploitation film about three martial arts specialists, one a record producer played by Jim Brown, one a PR man played by Fred Williams, and one a karate Black Belt played by Jim Kelly, who must prevent white supremacists from tainting the U.S. water supply with a toxin that is only harmful to black people.