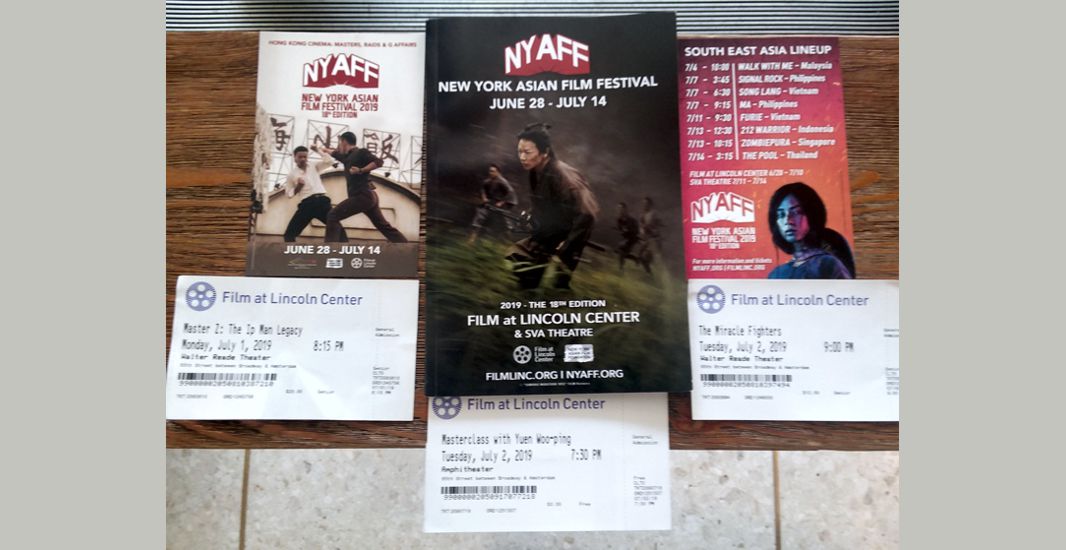 For those of us that have practiced martial arts when the weather is too cold, or when the weather is too hot, we received a bit of respite this week with others who appreciate martial arts films and martial arts choreography at it’s highest level. At the New York Asian Film Festival (NYAFF) this year Master Woo-Ping Yuen not only received the Star Asia Lifetime Achievement Award, but he also attended the presentation of 2 out of 3 of his films, and he personally discussed the films with those of us in the audience.

The first movie was titled Master Z: The Ip Man Legacy (2018). Through an interpreter, Woo-Ping Yuen explained that Jin Zhang (Max Zhang), in the title role of Cheung Tin-chi, was the easiest to shoot out of all the actors he worked with. He also said, during a discussion about different people that he worked with, that Michelle Yeoh puts everything she has into whatever part she is performing, and that she takes directions very well. I had never seen Master Z: The Ip Man Legacy (2018) before, although I knew about it. There is a lot of fighting in this film and I found it most interesting that many of the performers [from my knowledge] have different background. Some are dancers, others wrestlers or wu shu or shaolin practitioners etc. While discussing different actors, Jackie Chan‘s name came up. Woo-Ping Yuen told us how, when he first met Jackie, Jackie gave Yuen examples of his work but Woo-Ping said that those films had all been flops. However, Woo-Ping Yuen felt that Jackie had a real knack for comedy. See-Yuen Ng didn’t want to work with Jackie Chan and it took some convincing on Woo-Ping Yuen’s part to change See-Yuen Ng’s mind.

According to Woo-Ping Yuen, Hong Kong action movies made their mark on the world through Bruce Lee. When asked about Jet Li, Yuen made a statement that caught everyone off guard. This particular discussion was a comparison of different actors and he was discussing aspects of grace and power. He said that in terms of grace, Jet Li had a quality that was beyond that of both Jackie Chan and Donnie Yen. Woo-Ping was asked about working with the actors in general and how he goes about it. He said his answers was simple; “I control them”. Everyone laughed. Donnie Yen came to Woo-Ping Yuen when he was 19 years old, brought by his mother, Madame Bow-Sim Mark, a Grandmaster in her own right. I remember Madame Bow-Sim Mark coming to a park in New York’s Chinatown in support of the late Master Tsung Hwa Jou at the early stages of the Zhang San Feng Festival. I also remember her holding workshops at the Taiji Farm during the time the festival was being held. I knew who she was and was surprised that somebody so well known was connected with Master Jou, who said he started practicing too late to be a Boxer.

Master Yuen discussed using all the different martial arts styles in filming and also in connection to the story. As in Master Z, which takes place after Master Z lost to Ip Man (Ip Man 3 with Donnie Yen) and how he gave up Wing Chun, so Wing Chun was not even used in the early part of the film. It was stated that Master Z was an “underground fighter’.

Some of Master Yuen’s background was discussed with the Cantonese Opera as one of the subjects. He discussed it’s decline and the film studios coming to Master Yuen’s father Siu-Tin Yuen. He discussed his work as a stuntman. He said that you walked into the set first, if you were standing you would be standing on the side never in the middle, and you would be the first to die. When Drunken Master (1978) was made it took about two months to make. Snake In The Eagle’s Shadow (1978) took less time, but The Miracle Fighters (1982) took 170 plus days. Mr. Yuen wanted to make his own style of films, films that were not so serious and only about fighting, so he created his own style of Kung Fu comedy. When Snake In The Eagle”s Shadow (1978) came out, it was a huge success. He shared about how the distributors for the movie in Taiwan invited everyone connected with the film to a huge banquet in Taiwan and everyone got drunk and the distributor said “hey is there something like Drunken Fist?”.

In some of my previous articles I have talked about what I call “The Dao Of Movement” mentioning stances. In The Miracle Fighters (1982), a film which I believe includes 5 Yuen brothers including Woo-Ping Yuen and Hsin Yee Yuen who plays the main villain, “The Bat Sorcerer”. In this movie and others when Hsin Yee Yuen plays a similar character, he goes through these beautiful motions and lands in a beautiful stance truly giving a demonstration of pure self-expression. His character is actually introduced in Taoism Drunkard (1984) and the role he plays is similar if not the same. Even though the film was a comedy it took a great deal of work to make. They had to find people who actually knew something about the martial arts being used because their was no CGI at that time which made the film very difficult to make. I had seen The Miracle Fighters (1982) when it came out, but now I saw it from a different perspective. When The Miracle Fighters (1982) was released in Taiwan, the theaters actually sold standing room tickets even though it was against the law at the time.