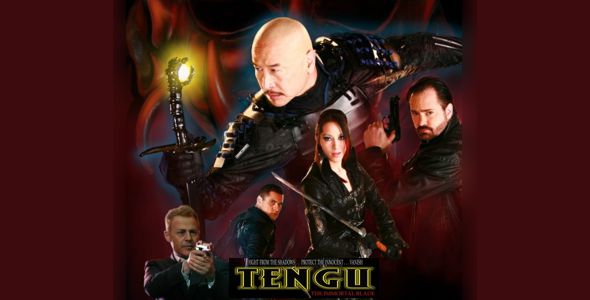 Legacy of the Tengu (2014) takes place in 15th century Japan, where Asura (James Lew) is given a magical sword by Tengu, a half human/half crow creature. This sword bestowed the gift of immortality, but this immortality came with a heavy price. Asura was now honor bound to become a protector of our world, guarding it against the forces of darkness. Throughout time Asura fulfills his duty honorably and without question.

When the sorcerer, Tanaro, (Trygve Lode) who had killed Asura’s master in feudal Japan centuries earlier, comes back from beyond the grave, it is his mission to summon a powerful evil upon the earth. To accomplish his goal, Tanaro’s soul inhabits a metropolitan police officer and he connects with a modern version of his ancient cult to recover powerful artifacts that will enable Tanaro to open a gateway between our realm and that of a malevolent evil known as Akuma.

Along with his apprentices, Kotori (Sara Salaza) and Domino (Sam Del Rio), and police detective Drake (Mark Steven Grove), Asura must stop Tanaro and his minions from completing the ritual that will unleash hell on Earth.

Legacy of the Tengu (2014) is brought to you by Asgard Entertainment.

Mark Steven Grove
Mark has been making movies and writing scripts since he can remember. His school notebooks filled with dialogue, his 8mm camera capturing proof of his inovative effects techniques, stop motion and stunts. As a Ninjutsu practinioner since the age of 6 he wanted to bring to life a tale where the intrigue and mysticsm of the ninja saves the world.

In Legacy of the Tengu (2014), James play Asura, a ninja from Feudal Japan who is given a magical sword by the powerful Tengu, to protect mankind against the evil forces that plague the world of man.

Louis Mandylor as Carson
A man of many talents, Louis, starred in the 400 million dollar-grossing history-making independent comedy My Big Fat Greek Wedding. He is also remains a highly sought-after actor counting more than a dozen new feature films among his many credits.

In Legacy of the Tengu (2014) Louis portrays Detective Carson, the partner of Detective Drake Forester (Mark Steven Grove). Carson is charasmatic and loves to live it up, but it may get him into trouble.

Sara Salazar as Kotori
As a superhero fan from a young age, Sara found her calling in action performing and translated that to her love of acting. Through a stroke of luck she found Asgard Entertainent and has literally trained for the roll of Kotori.

In Legacy of the Tengu (2014), Kotori is a loyal and passionate ninja who has seen evil in the world but believes in the strength of mankind to overcome temptation. She finds a spark of hope in someone she meets in along the way.

Sam Del Rio as Domino
A lifelong martial artist and performer, Sam is a natural. He has been training with Asgard Entertainment almost since it’s inception, and as a top performer, now helps train new members of the Asgard team.

In Legacy of the Tengu (2014), he plays Domino, a passionate defender of good, who wants to use his abilities to help the world in any way he can.

Mark Steven Grove as Drake
Mark Grove is a true Ninjutsu master and has been teaching his art for nearly 30 years. In Legacy of the Tengu (2014), as Detective Drake Forrester, Mark plays the cop who enters into a strange world of mysticism and magic, and he soon discovers that he is a bigger part of this world than he ever imagined.

Jon Firestone Director of Photography
Jon has a passion for creating great imagery for scenes. His lighting direction and shooting style add that extra layer that keeps an audiences eyes glued to the screen.

In Legacy of the Tengu (2014) Jon brings a sinister feeling to this alternate world within our own.