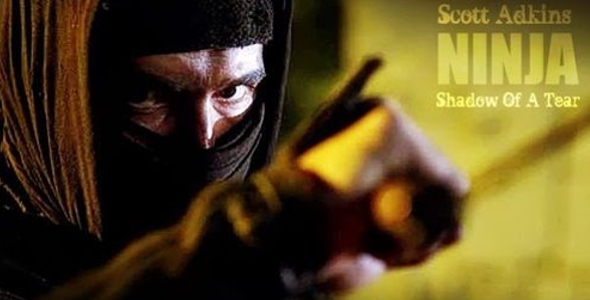 In Ninja Shadow of a Tear (2013), Casey Bowman has finally settled down. He’s happily married to Namiko (who is pregnant with their first child), living in Japan and teaching at the Koga dojo. While buying her a present, Casey is attacked by two punks. He shrugs it off, assuming it to be a simple mugging. But when Namiko is brutally murdered later that same night, Casey’s world falls apart. Stricken with grief and thirsty for revenge, Casey tracks down the two thugs who tried to rob him, but they can’t provide him with any clues to his wife’s murder. So Casey travels to Thailand, to the dojo of a close friend. His grief and anger are taking control of him and he lashes out while sparring with other students. When one of the students is killed in the same way as Namiko, Casey finally gets the clues he needs to track down his wife’s killer and unravel a mystery of grudges deep in the Burmese jungle.

Isaac Florentine’s newest film Ninja Shadow of a Tear (2013) is no Chinese Hong Kong cheap Chop Suey action flick. It is a full blown Hollywood actioneer with all the goods a top notch film needs to be remembered for years to come.

Ninja Shadow of a Tear, produced by Avi Learner and Boas Davidson of Nu Image Millenium its going to fill dojo’s once again like Bloodsport (1988) and Enter The Dragon (1973) did in the 70’s and 80’s.

Scott’s martial arts skills have gone way up in quality from being good to being amazingly awesome. In fantastic condition he will have the girls going wild over the pretty boy that fights like a man on a mission. Coupled with the newest bad guy Kane Kosugi yep that’s right Kane Kosugi is Sho Kosugi’s son. Sho was the star of so many of the 1980’s first Ninja craze flicks  and put classic films like Revenge of The Ninja, Pray For Death and loads more on the map and made Ninja a house hold word across America. Kane is a star in his own right in his native Japan and now he hits Hollywood with a kick and a punch just like his old man did 30 years ago. These two deliver an on screen dilemma of like and respect, to hate and pure distraught for each other as Casey tries to discover who was responsible for the death of his pregnant wife Namiko and child.

The story in Ninja Shadow of a Tear is one of revenge as Caseys (Scott Adkins) wife is killed by a gang and Casey trails the bad guys from Japan to Thailand and into the Burmese Jungles.

The fight scenes, mixed with excellent acting by Adkins and Kosugi make for pacing that doesn’t leave you out of breath. But then again when the action starts look out as all hell breaks loose and the kicks are high, fast and amazing gravity defying. Sword fights that are bloody but not gorri. OH did I mention no wires in the filming of the fight scenes.  You won’t believe it.  This is a bow to both Scott and Kane for there amazing clean crisp fast technical skills that only comes from hours of training in a dojo.

The main murder weapon is a manrikigusari or a 30” chain that is used to strangle and take down an opponent used by Ninja of the 16th Century. The cool thing about this one though is that it is made out of barbed wire the calling card of the bad guys gang that leaves a nasty mark on the necks of its victims.

Supporting rolls by Jahwad and Tim Man who both give great performances as well as a rounded out cast of quality martial artists that really deliver a historically and technically excellent film that any who has trained or studied Ninjitsu will look at with a discerning eye and give it a thumbs up approval. Sweden’s Tim Man also was the fight choreographer and he needs to stand and take a deep bow for doing such an amazing job in all these fights.

Another layer of interest to the film is Florentine’s passion and painstaking attention to detail of his stories as he researches his stories with meticulous detail to insure they are correct and he does it again in this one as he shows true and accurate logo’s of  Ninja and the true story of Fujita Saiko the last of the Koga Ninja lineage who died in 1966 and who was the last of the real Ninja during WW2.

The film has reminders of Enter The Dragon (1973), two broken bottles and an amazing step in side kick and although there is no room of mirrors there is no doubt that Florentine was paying homage to the Little Dragon in the last fight scene. And as well he pays homage again to Bruce Lee when he emulates Fist of Fury (1972) in one of the dojo fight scenes where he fights a bunch of guys all at once which by the way was done in one take and kudos to Ross Clarkson the camera man who did an amazing job behind the camera as only he can do.

If you liked Ninja #1 you are going to love this one that is for sure. The film delivers and in my not so unbiased opinion it is Florentine’s best film yet.

Will it be as big a smash hit as Enter The Dragon (1973) or Bloodsport (1988) or not? Well that is going to be up to you the fans to make that call but one thing for sure don’t miss this one for some stupid over done Computer Graphically enhanced phony baloney martial arts story we all know is pure BS with impossible moves no one can do. What a refreshing relief to see no crazy wire work that makes you go OMG another Chop Suey flick made in America. Leave that crap to the guys in Hong Kong.

Come on Hollywood wake up and give this guy a budget that will set the martial arts film making on its heels once again. No one can tell a story and delivers on the action better than the way Isaac Florentine can do it and I mean no one.