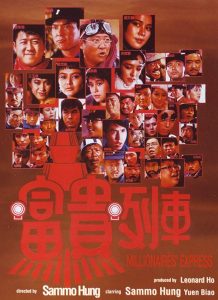 Shanghai Express (1986) or Millionaires Express is an action, comedy, western with an all star cast including Yukari Oshima, Richard Norton, Yasuaki Kurata, Cynthia Rothrock, Biao Yuen, Jang Lee Hwang, Bolo Yeung and Sammo Kam-Bo Hung who also directs the film and is the stunt coordinator. The film is a mixture of far east action and the thrills of an American western.

Shanghai Express (1986) takes place during the early reign of Republic of China. The Chinese Government sends a secret agent by the name of Fook Loi (Kenny Bee) to pursue an outlaw by the name of Foon-Tin Ching (Sammo Hung Kam-Bo). Ching is able to repeatedly escape capture and travels to his home town of Han Shui. In an attempt to help himself and the town he buys up everything, hoping to return the town to prosperity by sabotaging the maiden run of a newly launched express train filled with wealthy merchants, high officials and noble lords, as well as a Japanese envoy who have stolen back a map from the Chinese and are taking their national treasure to Shanghai. Sabotaging the train will force the passengers to stop in Foon-Tin Ching’s town where they will spend lots of money. Foon-Tin Ching plans are working but things become complicated when the triads and gangsters infiltrate the town to rob it, and to steal the Japanese National treasure scroll protected by the three Japanese samurai. All this forces Foon-Tin Ching to cooperate with security master Tsao Cheuk Kin (Yuen Biao), ex-security master Joke Bo (Eric Tsang), secret agent Fook Loi (Kenny Bee), the residents in the town, and the passengers from the train, all who must fight together against the gangs. When the triads and gangsters are defeated and flee, Foon-Tin Ching returns to being a fugitive.