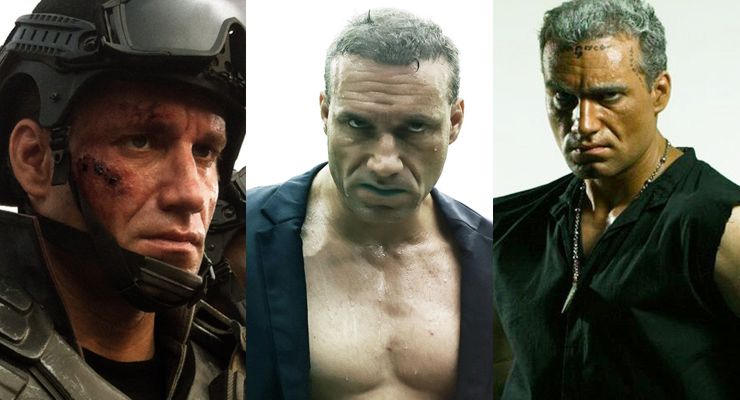 Dutch martial artist, stuntman and actor, Ron Smoorenburg, was born on April 30, 1974. He is well known for the his fight with Jackie Chan at the end of the movie, Who Am I?  (1998). He also known for his record highest kick of 11 feet in 1997. He lives in Thailand where he works as a stuntman, fight choreographer and as an actor.

Over the last 20 years Ron has worked with many well known action stars and directors and he has worked hard to develop as an actor with a versatile and experienced action background.

Ron Smoorenburg plays Steiner, a German Mercenary in the movie Triple Threat (2017). Coming out in 2018, Ron plays a General in the movie Asura (2017), directed by Peng Zhang. He works with martial artists Caitlin Dechelle and Joel Adrian in Asura.

At the age of seven, Ron Smoorenburg began studying Judo for four years. He then began to study karate and free fighting. Like most martial artists, he was influenced by martial arts movie stars like Jackie Chan, In-Shik Hwang and Jean-Claude Van Damme.  Ron began his entertainment career doing martial arts demonstrations live and on television shows. In 1997, Ron performed an eleven foot high kick, most certainly a record.

In 1997, Jackie Chan was filming Who Am I? in Rotterdam and Ron decided to audition for a role in the film. Jackie was impressed with his kicking skills and hired him to play one of two final opponents Chan would fight on the roof of the Willemswerf Building. What looked so easy when Jackie Chan was doing it was not easy at all. Ron had to learn how to work in a fight scene for the first time and had trouble adapting to Jackie Chan’s trademark rhythmic movements. Ron eventually learned to work with Jackie’s pacing but was doubled by Jackie Chan Stunt Team members Brad Allan, Andy Cheng, and Nicky Li for the more complicated fights techniques. Ron would go on to appear as a top villain on an episode of the short-lived action series Der Puma: Kampfer mit Herz, taking on Mickey Hardt, the series’ lead star. Donnie Yen was as the series action director.

These experiences were good for Ron and he would continue to take on bit parts in Hong Kong movies. He played a cage fighter in Gen-X Cops 2: Metal Mayhem (2000) where he fought against Stephen Fung in a short fight scene. The two would have a longer fight scene in The Avenging Fist (2001), the Tekken-inspired film.  Ron Smoorenburg played a character resembling Bryan Fury against Stephen Fung’s Iron Surfer, who resembled Hwoarang. Smoorenburg would play another fighter in Born Wild opposite Louis Koo and then played the main villain in Martial Angels (2001) opposite Qi Shu.

Smoorenburg returned home to the Netherlands in 2002 and began to use the skills he had learned in Hong Kong to work as a fight choreographer and actor. He appeared in director Marc Ickx’s Belgian horror film Engine Trouble (2002) and in 2004 he co-starred and choreographed the Netherlands’ first full-length martial arts film, Fighting Fish, starring Chinese-born Ho-Kim Kim.

In 2005, Ron Smoorenburg went to Thailand to work as a stunt fighter on Tom-Yum-Goong as one of the multiple fighters against Tony Jaa. Ron’s experience in Thailand was so positive that he decided to move to Thailand, He has since appeared in both film and television series in Thailand, showcasing his action style.

Ron Smoorenburg has become good friends with Swedish-Chinese born stuntman Tim Man and French-born stuntman Brahim Achabbakhe. Ron can be seen fighting Scott Adkins in Isaac Florentine’s Ninja: Shadow of a Tear (2013) and he teams up with Achabbakhe to take on Kane Kosugi in the sequel Tekken: Kazuya’s Revenge . In 2016, Smoorenburg had role of a fighter who takes on Michael Jai White in the opening scene of Never Back Down: No Surrender and plays the heroic Black Knight in Warrior’s Gate opposite Dave Bautista. He has also appeared in Bollywood films such as Brothers (2015) starring Akshay Kumar and Sultan (2016) starring Salman Khan.