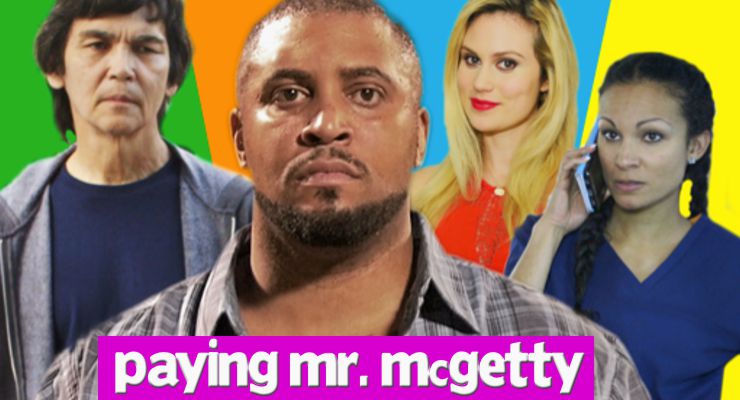 Tyrell lost the rent money, has a mob hit on his head, has a disgruntled boss on his back, a relationship on the rocks, and he has only one day to fix it all! He can’t remember last night, but today is a day he will never forget!

In Paying Mr. McGetty Tyrell (R. Marcos Taylor) spends  a long night drinking and gambling when is awakened by an angry phone call from his girlfriend Meena (Anita Clay) to find he is in bed with a strange woman, Cecelia (Alissa Schneide), who happens to be the daughter of a local mob boss.

When Cecelia’s father finds out about Tyrell and his daughter, he hires Shota (Don Wilson), a relentless hitman, to take Tyrell out. To make matters worse, the reward the mob boss puts on Tyrell’s head has dozens of others out to kill him.

Even worse than death for Tyrell is the fact that his actions have put Meena, the love of his life, in a great deal of danger. Tyrell must take on the mob and their Hitman Shota, while trying to find the money to pay the rent to Mr. McGetty, all before the sun rises.

Paying Mr. McGetty will Premiere at the Burbank International Film Festival on Sunday, September 11, 2016 with Red Carpet at AMC Burbank 16 at 12:30pm. the screening will take place in Theater 11 at 1:30pm.

The film is produced by Traditionz Entertainment. From their offices in Los Angeles, California and Cocoa, Florida, Traditionz Movie 2 produces family friendly feature films, along with television and digital programming. They are currently, in development of The Martial Arts Kid II and the vampire-action flick Blood Raid.